Post-Production: A Guide Through the Fundamentals 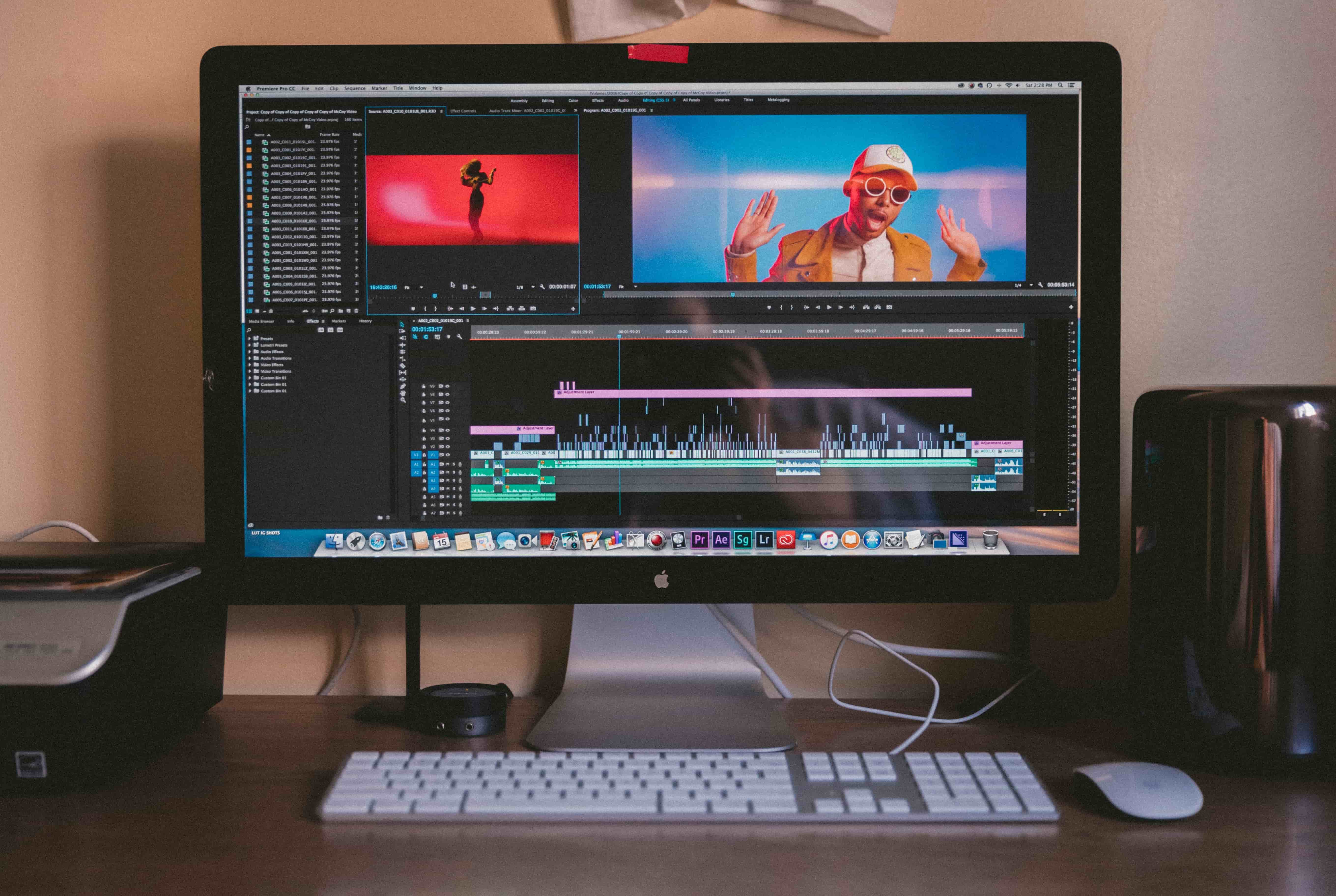 As a creator, you know there isn’t one piece to the entire filmmaking process that’s more vital than another. And the post-production process, if of course, incredibly integral to the final product delivered. So whether you’re working on a future blockbuster or a 10 second video ad for a client, we’re breaking down some fundamentals to give you a direct line to the essential knowledge needed to get the job across the finish line.

What is post-production in media?

We can broadly define post-production as any work done on a project after its initial recording or creation but before the project itself is ready for release. While the specific list of movie post-production steps would differ dramatically from a list of still-picture post-production tasks, the fundamental goal of photo and film post-production remains the same.

At the end of the day, any and all steps in post-production should push a project closer to the finish line, the point at which it’s ready to be shared with its audience.

That statement may seem obvious, but it carries a simple truth that gives post-production meaning and an important implication for understanding the film and TV post process as a whole.

Let’s investigate that implication further by zooming in on the post-production stage in filmmaking.

What is post-production in film?

As mentioned above, the purpose is the same. But the film and TV post-production process tends to differ from other media primarily in terms of diversity and complexity. In contrast with post-production editing in photography or music, video post is a hybrid process that requires knowledge and expertise drawn from a variety of fields.

Just think of your average blockbuster.

You can see the absurdity of steps and departments needed just within the post department to make a movie happen. Check out Peter Jackson and the Post Team who made The Hobbit happen within a (very) quick turnaround time.

There’s a reason, after all, that blockbuster credits include an army of names.

So what is post-production in film? An exhaustive answer would be highly complex and inevitably vary from project to project, but we can use our understanding of post-production philosophy as a guiding light. Video post-production draws on any discipline or process necessary to prepare a project for its viewers’ eyeballs and ear holes.

Let’s take a look at what that might include.

Exactly what happens during post-production?

In reality, post on a film, video, or TV show involves a wide range of activities that often overlap during the course of the project’s post period.

Below, we’ll break down the seven fundamental steps in post-production. While the exact steps in post may vary from project to project, the major considerations required to finish this process will generally remain the same.

With that in mind, let’s dig in:

The most essential step in the post-production process is picture editing. This is where you transform raw footage and other post-production materials into a story. It’s where everything begins to come together.

The goal of picture editing is to cut the footage acquired during principal photography into the visible foundation of a living, breathing movie or television show. In this sense, you can think of picture editing as the spine and skeleton of the post-production process as a whole.

A great deal of work may still be required after picture editing, but a project’s story, tone, characters, and themes should become increasingly tangible as the project moves from rough cut to picture lock.

For more about integrating picture editing into the post-production workflow, check out this Adobe Premiere Pro post-production process pdf from the Motion Pictures Editors Guild.

As picture editing proceeds towards its conclusion, a project’s sound design takes on a profound importance. In modern movies, high-quality audio is just as important as a high-quality image.

While the lion’s share of sound design takes place after picture lock, the process of audio editing often begins in parallel with a project’s picture editing. Libraries of sound effects and on-set recordings are gradually combined with foley, ADR, and digital manipulation to shape a film or TV show’s sonic environment.

Of course, all that still leaves out one critical ingredient…

Music is an undeniable force in movies. The power of its presence can propel entire films, while the vacuum of its well-executed absence creates a pressure all its own.

Needless to say, the processes of creating, licensing, adding, and subtracting music within a film or TV show is of the utmost importance during post-production.

The process itself may begin all the way back in a project’s pre-production phase, with composers who ideate scores during a project’s earliest stages or directors who brainstorm playlists while they simultaneously design shot lists. However, music editing often doesn’t realize its full execution until after picture lock, when scores are recorded with full orchestras and jukebox hits are negotiated and licensed by studio legal teams.

4. Sound Mixing: How to level up

After a project’s picture is locked and music is set, the final and most crucial phase of audio design may commence. It’s known as sound mixing.

Sound mixing is a little bit like the last steps of baking a good cake without a recipe. You’ve already gathered the right ingredients, but you still have to figure out the right proportions.

Audio mixing is where you dial in audio levels to make your movie finally sound like a movie.

5. VFX: More than meets the eye

Not all post-production materials are generated during principal photography. With the increasing sophistication of post-production technology and the proliferation of digital VFX, the most critical elements of many modern movies aren’t added until the last possible second.

Depending on the project, the application of digital VFX can run the gamut from rotoscoping out an unwanted object to fully animating a central character. The process can be time-consuming and often requires a veritable army of trained professionals with highly specialized skills.

As such, the VFX process often begins early on in a project’s life cycle with concept art, animation tests, and even 3D pre-visualization. Its' finalization, however, is frequently one of the last completed tasks before a project’s public release.

Once a project is picture-locked, the process of color grading and correcting can begin.

Color grading is an extension of the director and cinematographer’s initial intent in shooting the project during pre-production. Hues are shifted and tones are tweaked until a film’s images are optimized for telling the story.

Cinematographers talk about their involvement in the color grading process during post.

Color grading generally happens in parallel with other processes occurring after picture lock, but the exact order of operations its workflow follows will likely depend on the production’s priorities and the project’s VFX necessities.

7. Motion Graphics: Credits where credit’s due

What does post-production mean for motion graphic designers?

It means it’s time to build titles and credits.

The scale and complexity of both titles and credits can vary dramatically from project to project, but their inclusion is a critical component of a film or TV show’s identity. Before any major project is released, motion graphic designers put days, weeks, and sometimes even months of painstaking, detail-oriented work into these seemingly straightforward elements.

Saul and Elaine Bass knew a thing or two about title design.

While a project’s post phase technically ends when it’s finalized for release, the life cycle of the project itself only ends with promotion and distribution, phases within which various post-production materials must be interweaved.

From cutting trailers to preparing a film for theatrical release to prepping blu-ray menus, the post workflow must be considerate of a project’s final stages. While working through post, it’s critical to remember that a film or TV show will eventually be passed into the hands of its audience. This simple idea can offer effective guidance in developing a project’s post-production workflow.

Side Note: What is a post-production company?

As post-production technologies and software grow both more unique and more diverse, the need for specialized skills and infrastructure in the post workflow has likewise grown more intense. The supply to meet this demand is largely provided by an array of post companies.

A post company is any company that offers specialized web, TV, or film post-production services as its own business entity. Post companies exist to offer a wide range of services, including but not limited to:

It’s important to be aware of post-production companies because of their place in the post pipeline. Major studio films and independent productions alike should understand the services that various companies offer and be prepared to integrate cooperation with these companies into their project’s overall workflow.

Depending on the specifics of your project, it may be in your best interest to keep production entirely in-house. To help you figure out how much of your workflow is manageable, here’s a rundown of commonly used examples of post-production software:

For further information, check out our post on the best filmmaking software and tools currently available.

Now, let’s jump into how to level-up your workflow.

From storage considerations to organization practices to how to better collaborate with VFX teams, discover how to master your post workflow from seasoned creators.