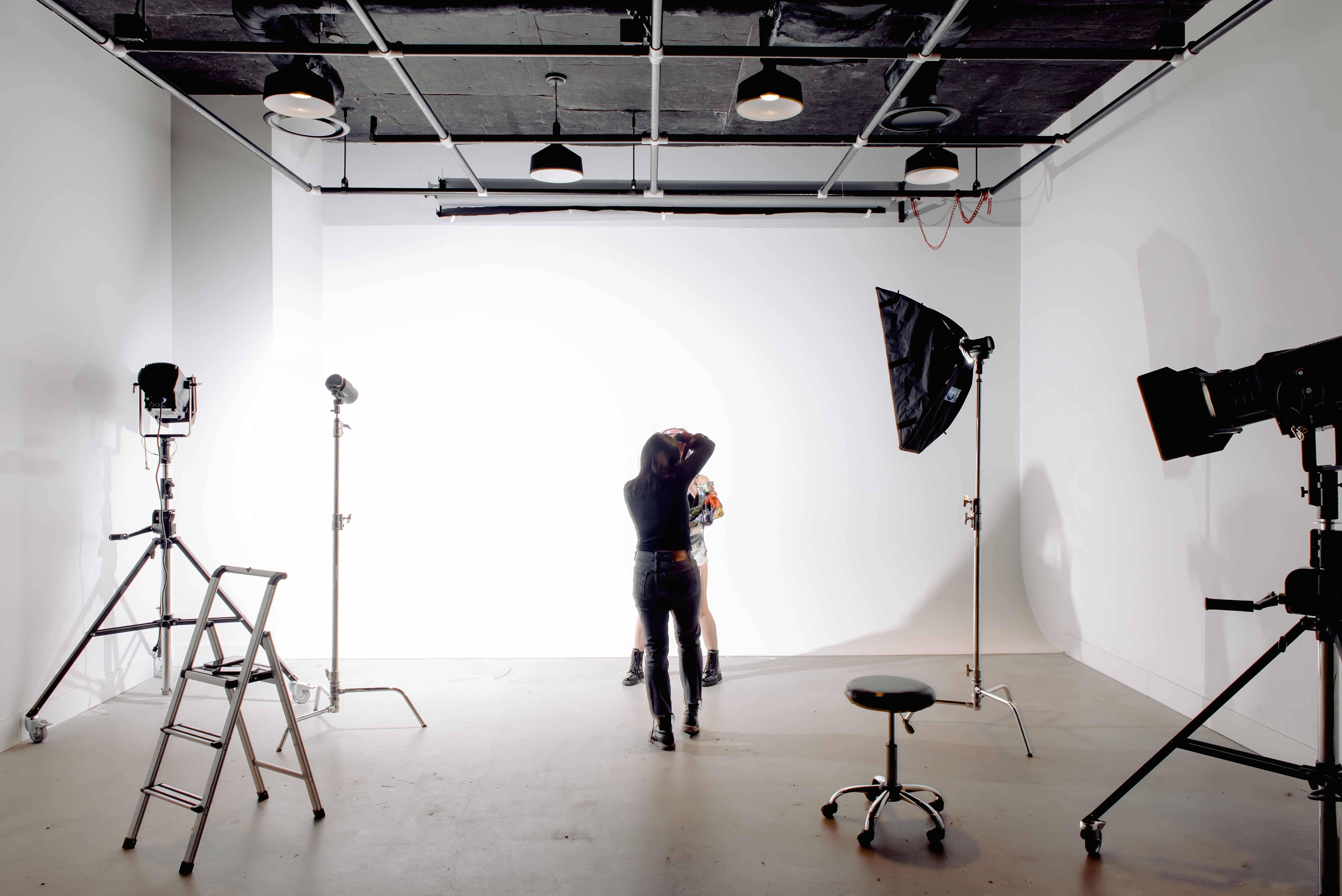 No matter where you’re planning to shoot, booking the right photo studio for your production can be a significant challenge. If you’re searching for the best photo studio in Los Angeles, the bright side is that America’s entertainment capital provides more options than you could ever need.

But there are literally hundreds upon hundreds in the Los Angeles area alone. In this post, we’re going to take a look at seven of the best photo studios in Los Angeles, ranked in no particular order.

Famously started in 1992 as a modest transportation service, Quixote is today an industry-leading supplier of all things image production: equipment, supplies, and even photo studios.

Quixote doesn’t boast just one top-ranking photo studio in Los Angeles. With stages in West Hollywood, Griffith Park, and the North Valley (plus, a branch all the way over in New Orleans), Quixote boasts several of the best photo studios that L.A. has to offer.

But Quixote prides itself on providing not just peak professional experiences, but also phenomenal personal experiences that you and your crew are bound to remember for many productions to come.

Of course, Quixote’s track record for incredible customer service is perhaps the most important part of that equation, but their dedication to sheer fun doesn’t hurt either. Quixote Studios’ production facilities include features like ping-pong tables and The Darkroom, a bar-themed stage space that can double as an actual bar.

And if all that isn’t convincing enough, Quixote offers the only photo studio in Los Angeles that’s directly backed by the one of largest, most diverse, and most reliable suppliers of image-production equipment in the industry.

You don’t have to be in the PGA to know that’s a big deal.

Milk Studios is the polar opposite of what you’d associate with a “cheap” photo studio in Los Angeles.

Rather, Milk is - to put it bluntly - pure luxury.

Originally founded as a small photography studio in New York City’s Meatpacking District, Milk Studios has since blossomed into a media conglomerate with major influence in fashion, photography, events, and even cosmetics.

Milk Studios offers top tier production facilities, an envious array of amenities (including full equipment rental), and one of the best reputations in the business, but that’s just the tip of the iceberg.

On top of all the style and taste that makes Milk THE luxury photo studio in Los Angeles, Milk Studios also offers its clients the unique firepower that comes with the Milk DGTL and Milk Agency arms of their organization.

Together or separately, Milk DGTL and Milk Agency offer services and strategy, respectively, to help move your project through nearly any stage in its lifecycle. They offer in-house DPs and technicians, production support, exhibition services, archival services, print services, you name it.

Milk DGTL can even produce an entire shoot, top to bottom, for clients who are so inclined.

Founded in 1991 by the great grandsons of acclaimed Hollywood makeup artist Max Factor, Smashbox Studios is a photo studio in Los Angeles and New York that explicitly caters to high-class professionals.

As a photo studio in Los Angeles, Smashbox’s two sites in Downtown L.A. and Culver City offer nine studio spaces between them, plus an abundance of opportunities for outdoor shooting.

Most of the individual spaces come with new-and-improved versions of standard features for a photo studio in Los Angeles, specifically designed to go above and beyond common expectations. Smashbox’s spaces generally come with private patios, private kitchenettes, private restrooms, private hair, makeup, and wardrobe spaces, as well as top-of-the-line internet and digital integration.

With most of its stages, Smashbox even offers the drool-worthy feature of included valet service.

To further lighten your stress load, Smashbox Studios can cover almost any of your production needs with in-house services ranging from camera, grip, and lighting rentals to post-production management all the way to providing motion capture solutions, a futuristic and highly attractive feature that’s still unusual for a standard photo studio in Los Angeles.

If you’re looking for stage service that prioritizes your comfort above all in Los Angeles, rent photo studio space from Smashbox.

FD Photo Studios is a national chain of professional photo studios with spaces in Los Angeles, New York, and Chicago.

Given FD’s remarkably affordable rates, you might be tempted to think of it as a “cheap” photo studio in Los Angeles, but- make no mistake- FD Photo Studio Los Angeles is no bargain bin operation.

As FD’s main branch, FD Photo Studio Los Angeles offers a flood of features, services, and unique perks that gleefully rival those of its pricier competitors.

There’s at least one simple piece of advice that all seasoned producers would agree on in the debate over the best photo studio in Los Angeles: rent photo studios with options.

Lots and lots of options.

Hubble Studios is a full-service, boutique studio and event space offering multiple stages in multiple sizes with enough amenities and flexibility to make your head spin.

Hubble even offers that most-coveted of features for a photo studio rental in Los Angeles: ample on-site parking.

Bottom line? If you’re looking for a high-quality, highly-flexible photo studio, rent your space from Hubble.

If you’re on the hunt for a classic photo studio rental, Hollywood-style, look no further than Naked Eye Studio.

Originally constructed in 1948, Naked Eye is a former art deco theater experiencing new life as a gorgeous film location, photo studio, and event space. In other words, it’s the rare photo studio rental in Los Angeles that comes with a rich sense of both history and class.

And if the outside isn’t impressive enough, check out the bow truss ceiling over their stage, which you can choose to bathe with warm, natural sun through a series of diffused skylights.

Just minutes from USC, Exposition Park, and the 10, Naked Eye Studios is a photo studio Los Angeles can truly be proud of.

Back in the 1930s, the Loft’s building was used as a dealership for the classic Hudson Motor Car Company. Today, that same building’s massive square footage has been repurposed to offer the Hudson Loft’s customers more than a dozen different studios to take advantage of.

Hudson Loft has carefully maintained the historical building’s integrity, resulting in bright, large, and clean spaces that act as perfect blank slates for any imagination.

On top of that- literally- the Hudson Loft offers a shootable rooftop space with a breathtaking, unbeatable view.

Suffice to say, Hudson Loft is perfect for events and shoots of nearly any kind, even some that you might not expect.

Next time you’re preparing a bid for a car commercial, for example, don’t be too quick to cross Hudson Lofts off your list as a potential photo studio in Los Angeles. The building is outfitted with a freight elevator capable of hauling heavy gear or- you guessed it- almost any standard vehicle up to its highest spaces.

Of course, the question of where to find the best photo studio in Los Angeles is a matter of opinion, and there are many incredible studios that we weren’t able to feature in this specific list (like Apex Photo Studios or Blackheart Studio, just to name a few).

At the end of the day, it’s all about finding the right photo studio for you.

If you’re not sure how to do that, check out our post on the 5 Keys to Finding the Perfect Studio Rental before googling “cheap photo studio in Los Angeles”.

A list of upcoming film festivals to save. From all around the world, submit or simply capitalize on these future networking opportunities.

Take a deep dive into how technology is impacting the production cycle, from beginning to end, top to bottom, from the most exciting tasks to even the most mundane.