When Should Brands and Agencies Consider In-House Production? 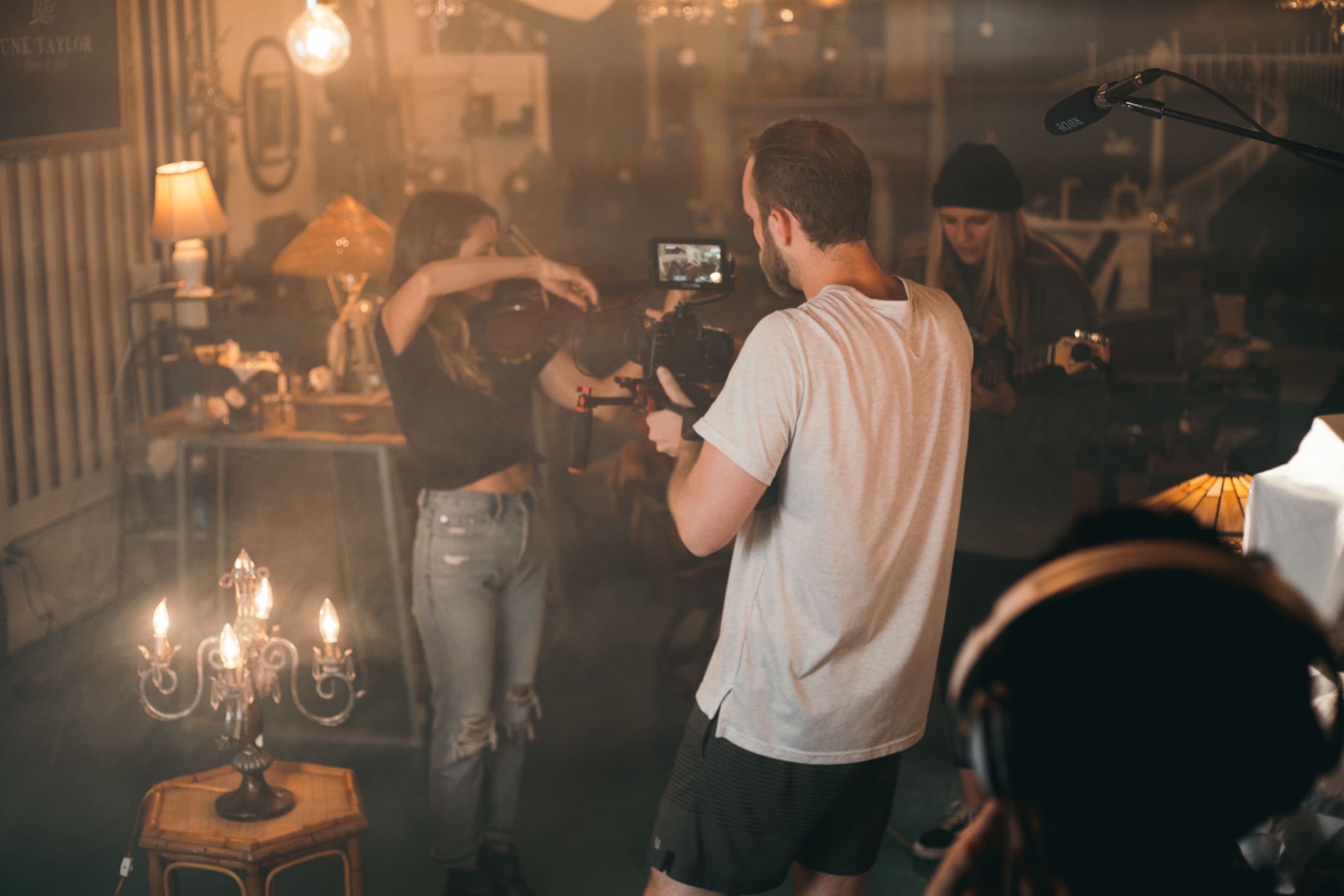 For brands and ad agencies alike, the decision to bring production in-house can either prove a major financial advantage or a major logistical headache.

So how can brands and agencies spot the difference between the two? How can they know if they’re facing their best decision ever or a disaster in the making?

While surefire answers are few and far between, this post is designed to give you a few critical hints. We’ll walk you through an overview of in-house production and explore five scenarios in which bringing production in-house might make sense for your brand or agency. Along the way, we’ll cover important questions to ask and crucial challenges to overcome.

What does “in-house production” even mean?

“In-house production” is a flexible term that can refer to a wide variety of specific, internal media production capabilities maintained by a brand, agency, or other organization.

Speaking broadly for our purposes, “in-house production” refers to an agency or brand’s ability to produce media entirely with its own internal resources and without engaging the services of any external facilities or personnel.

For brands operating in most industries, bringing production in-house usually takes the form of establishing a department or team responsible for creating promotional or educational media within the company. Depending on the size and identity of the given brand, their in-house production team might be supported by additional production infrastructure or resources, such as studio spaces, owned equipment, or information technology, among other items.

The specifics of in-house production for brands can become complex, but the basic concept is always simple. Brands bringing media production in-house are always investing in internal resources in order to produce media completely within the confines of their own organizations.

For ad agencies, however, the idea of “in-house production” is slightly more complicated by nature.

On the topic of in-house production, the chief difference between agencies and brands comes down to a matter of perspective. Brands bringing production in-house will be crafting media for themselves. Their media teams will likely be responsible to a marketing department and, ultimately, to the company as a whole. Agencies bringing production in-house, on the other hand, will mostly be crafting media for clients.

An agency’s relationship to its clients completely changes the equation when it comes to bringing production in-house. Like brands, the agency will usually establish a new team, department, or other organizational off-shoot for media creation. Also like brands, this new unit can be supported by any number of relevant resource investments. But unlike brands, this new unit will primarily be serving clients’ needs, with the agency’s needs being served more or less only by proxy.

In other words, they’re engaged in client work, not literal “in-house” work.

This single, fundamental difference in perspective between brands and agencies results in a tree of more complex differences in their philosophies on in-house production, some of which we’ll dig into later. However, these separate entities share the same debate over whether or not to bring production in-house.

We can sum it up with a single question:

This is an existential riddle for brands and agencies, but the truth is that there is no straightforward answer. Neither “in-house” nor “external” production is inherently better than the other.

Each element of in-house production- whether it’s personnel, equipment, or infrastructure- carries its own set of advantages and disadvantages, strengths and weaknesses, benefits and costs. To make matters more fun, the power and effectiveness of these separate pros and cons will vary in unique ways according to the specific circumstances of your particular brand or agency.

In other words, each brand and agency must answer the above question all on their own.

You, however, are not on your own.

Because we’re here to help.

This post is designed to give your deliberations a boost by breaking down five broad circumstances under which bringing production in-house might make sense for your agency or brand. Let’s explore key opportunities, challenges, and questions to ask about in-house production.

1. When in-house production saves you money

The impact of production on a brand or agency’s costs is a major consideration in the debate over whether or not to bring production in-house. Establishing any new in-house production capability will inevitably incur new costs in the form of initial investment, overhead, or some mixture of the two, but these may be collectively outweighed by cost savings in the long run.

This situation is of particular relevance for brands.

Brands seeking to bring production in-house stand to save boatloads of cash that would otherwise be spent on ad agencies and production companies. While it’s unlikely that in-house production could cover the entirety of a brand’s promotional needs, such capabilities would allow the brand to perform a significant portion of the work under its own roof.

Agencies also potentially stand to save, but the structure of those savings is more complex and less guaranteed.

However, for both brands and agencies, an examination of long- and short-term costs is crucial in deciding whether or not to bring production in-house.

2. When it makes you money

On the opposite end of the cost-benefit spectrum, it’s important to consider how in-house production might increase revenue.

For brands, revenue increases as a result of bringing production in-house essentially boil down to increased returns on faster, more flexible, or more efficient promotional media production. The process of measuring these revenue increases is generally reliant upon data analytics, which makes them difficult to project in advance.

For ad agencies, however, increased revenues due to bringing production in-house can be much more direct.

3. When it allows you to move faster

In theory, one of the major strengths of in-house production is its ability to move a project from idea to finished product faster, easier, and with fewer hoops to jump through compared to external production.

That brings up a question: When is speed an advantage?

And there’s a simple answer: Basically, all the time.

For both brands and agencies, having the resources to quickly turn around a project is a serious attraction, especially in those lightning-paced corners of the advertising world dominated by algorithms, branded content, and social media. In-house production can enable either type of organization to react to opportunities faster, which means they should have access to a higher volume of opportunities over time.

The subtext of this increased speed (i.e. the underlying qualities that create it) is also important to consider.

In-house production speeds up media creation by effectively cutting out its middlemen. This, in turn, streamlines communications and facilitates all elements of pre-production, amplifying the power of certain production processes in exchange for a simplification of the overall production structure.

But, sometimes, structure has its own advantages. While a brand or agency might find the prospect of faster production practically irresistible on its own, it’s important to consider critical secondary questions before making a final decision.

For example, what are your “middlemen” bringing to the table? Is cutting them out of the process really in your organization’s best interest? There will be plenty of instances when this is not the case.

4. When in-house production helps you expand

Bringing production in-house can be a viable growth strategy for brands and agencies alike.

For agencies, in-house production could be a sensible way to diversify service offerings. In-house production resources allow agencies to act with more flexibility and can open doors to a wider range of business opportunities.

When considering in-house production as an expansion method, it’s important to ask all the same questions that you would when facing any other growth opportunity.

Do you need to expand to meet business demand? Or do you want to expand to increase business demand? Is your firm already acting at maximum capacity? Or is there room to improve within the organization as it currently exists? Can you afford the investment necessary for bringing production in-house? Or will your brand or agency be taking on risks?

5. When it makes sense

When debating whether or not to bring production in-house, considering the unique circumstances of your own brand or agency is more important than any other question this or any other guide could ever point you to. The fact of the matter is that there are no one-size-fits-all answers, and the specificity of your own context requires that you find an equally specific solution.

But this is a good thing.

In practical terms, this means brands and ad agencies can tailor in-house production resources to fit their unique needs. Brands don’t necessarily have to make massive investments in production infrastructure. Instead, they could simply hire a small team to create media for their social feeds. Agencies likewise don’t have to hire a stable of high-profile directors and transform themselves into a major production company. Instead, they could offer their clients a small suite of specialized production services.

In any case, options are your best friend. When considering in-house production, don’t be afraid to also consider alternatives, variations, and new twists on traditional forms.

Bringing production in-house is not a decision to be taken lightly, but it can be taken piece by piece. Through the deliberate examination of the question and its context, an answer fitting your brand or agency’s particular needs will emerge naturally in time.

To read more about the relationships between brands, agencies, and production companies, check out our post on transparency and creativity in commercial production.