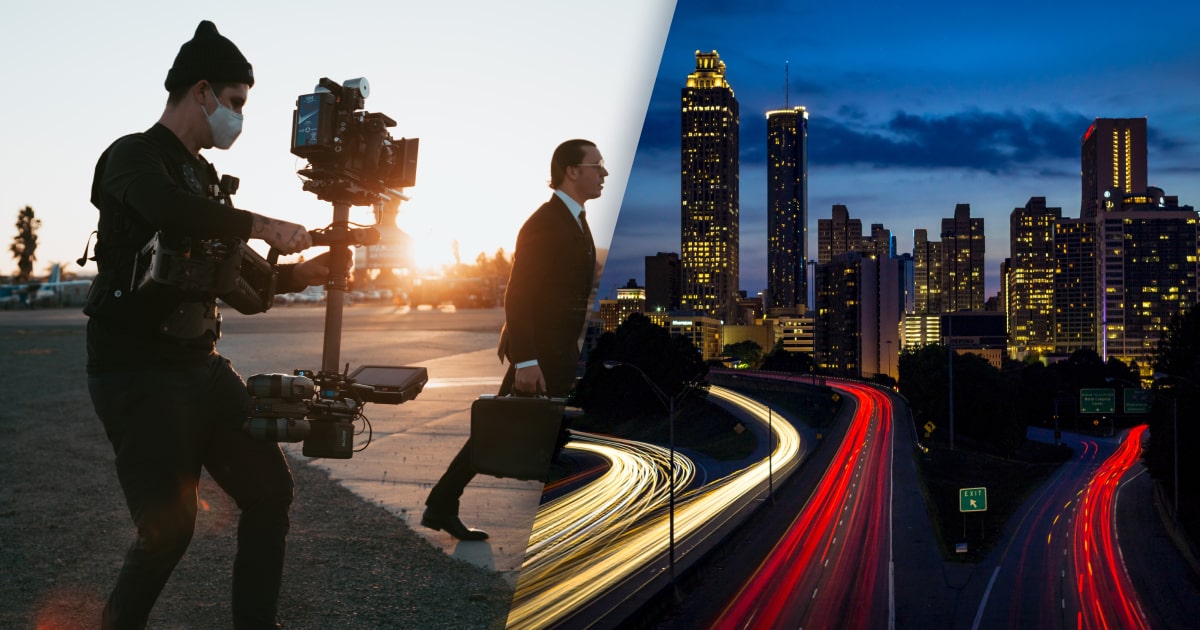 While Los Angeles remains the epicenter of filmmaking, many filmmakers know Georgia is (and has been) the next biggest game in town. Or I guess...out of town. While some may say it was The Walking Dead that put it on the map, 2016 saw more major feature films made in Georgia than even in California. And specifically, since the early 2000s, the Atlanta film industry has established itself as a massive production hub.

Georgia’s filmography is quite impressive, boasting an exhaustive list of productions 50 pages long!

But how exactly did Georgia become the Hollywood of the South?

To understand how the Georgia and Atlanta film industry grew, let's travel back to the 70s.

1972, the movie Deliverance put the state on the big screen.

And in 1973, then governor Jimmy Carter noticed the potential his state had for the film industry and created a film commission, today known as the Georgia Film, Music and Digital Entertainment Office. The commission started marketing the Peach State as a shooting location and, by 2007, the Office had recruited more than 550 major projects to film in the state.

In 2008, Governor Sonny Perdue doubled down on his predecessor’s efforts by signing a generous tax incentive for film productions.

This tax incentive significantly reduced tax payments for businesses or individuals. The goal, of course, was to entice them to invest money in a given area.

And it did just that.

Let’s take, for example, The Walking Dead, which started filming in Senoia, GA in 2011.

The notorious production and its numerous seasons met with an unprecedented success and brought financial growth to the small town and the area, with the production hiring local workers in mass for over a decade. The small town of Senoia was literally brought back to life (pun absolutely intended) and is today known and visited by fans from around the world.

Thanks to tourism and job creation generated by the Atlanta film industry growth, the government of Georgia estimated an economic boost of $7 billion in 2016 alone.

In 2018, the Georgia and Atlanta film industry estimated the same benefits at $9.5 billion.

It's no wonder it's dubbed the "Hollywood of the South"

The competitive tax incentive isn’t the only factor that brings major productions into the Peach State.

Experienced crew and well-equipped soundstages increase Georgia’s appeal. And the diversity and variety of locations available is also very enticing.

California has beaches, deserts, mountains and skyscrapers, not to mention major stages where sets are built to look like London or Paris.

And while California is known for its exceptional climate and beautiful light, Georgia too, has a little bit of everything in one place.

It can welcome and accommodate a wide repertoire of projects because of its diverse landscapes.

So, unless your entire movie specifically takes place on Mount Rainier or in Vermont in the middle of winter, Georgia has you covered.

Just ask Matt and Ross Duffer, the creators of Stranger Things, who obviously saw the immense potential the state had to offer and transformed Atlanta and surrounding areas to feel like 1980s Indiana.

Atlanta can be an amazing shape shifter when it comes to urban landscapes.

Its skyscrapers and suburbs alike have attracted productions that wanted to transform the city into New York or even Los Angeles..

Still, other productions prefer to showcase Atlanta itself, in all its glory. And, as it happens, the city of Atlanta is more than willing to accommodate productions with just that in mind.

It was mainly shot in Atlanta’s downtown area. And in order to shoot the film’s impressive car chases, the city went out of its way to shut down large chunks of surface streets and even an interstate highway.

Even more impressive is the sheer volume of epic studios that now exist in Georgia.

Georgia has gained its reputation as Hollywood’s toughest competitor by focusing on emerging technologies and building infrastructure to meet the needs of filmmakers. In the last few years, state-of-the-art studios seem to be popping up all over the region...

Most impressive among these spaces, Trilith Studios -formerly known as Pinewood Studios- is home to the Avengers movies and is literally a town in and of itself.

And this doesn’t even include the “Studio City” that’s underway, thanks to an old General Motors lot.

But even so, the state's filming future could be at risk.

On March 26 of 2021, Governor Brian Kemp signed a new election law severely limiting voters’ access. The restrictions – on vote counting and absentee voting, as well as prohibition of distribution of food and water in polling lines- could disproportionately impact people of color and citizens of lower economic status.

In the wake of the law’s passage, several celebrities protested and called on the film industry to boycott Georgia as a filming location. Director James Mangold and actor Mark Hamill, for instance, have endorsed the production boycott as a drastic measure against the bill.

Actor Will Smith and director Antoine Fuqua decided to follow the example and moved production of their Emancipation movie out of state.

With some of the top stars fleeing the state, where does this leave Georgia's industry?

It’s a tough situation, but others in the state are acknowledging that the boycott can be harmful to those it actually aims to support: Georgian laborers working in film production and adjacent industries, like tourism.

Most people working in the industry are not salaried and rely on opportunities being brought to their home state from outside in order to make a living. An outright boycott directly impacts their livelihood.

Advocating for change is also about being able to protect the most vulnerable, and putting a halt to the Atlanta film industry growth isn’t necessarily the only measure one can take to protest inequality.

Indeed, Hollywood can make itself heard by issuing statements about voting rights and by endorsing the right kind of legislators, in the form, for instance, of donations before an election campaign.

As of writing this post, productions are back up and running, with many celebrities foregoing the boycott.

Amongst celebrities that live in Atlanta, you can find Elton John, Cardi B, Dwayne “The Rock” Johnson, Ludacris, Shaquille o’Neal, Tyler Perry, the list goes on.

Superheroes are back in force in Georgia, with Black Panther filming its sequel, as well as the new superhero movie Black Adam.

AMC, HBO, Netflix and Disney all currently have running productions. You can find a full list of what’s filming right now in Georgia here.

And of course, we saved the best for last.

We cannot talk about the Atlanta film industry without talking about its homonym and absolute gem of a show, the FX comedy ‘Atlanta’.

After a –too long- hiatus of three years, its creator Donald Glover and his crew filmed Season 3 and Season 4 in late 2021. Season 3 premiered in Spring 2022.

The series, of course, is set in and all around the bubbling, effervescent city of Atlanta and its local rap scene.

The show demonstrates Atlanta’s artistic status is multi-hyphenate, with deep roots stretching beyond film production to music, through genres as diverse as Rap, Hip Hop, R&B, Blues, Country, and many more. The heart of the Atlanta film industry beats because of shows like this one. And regardless of what happens in the future, for now, this Georgia's film industry is alive and well.

If you want to take a deeper dive into the Atlanta film industry or are maybe even thinking of filming your next project in Georgia, make sure to check out our posts about Atlanta film permits and Georgia Tax Credits.