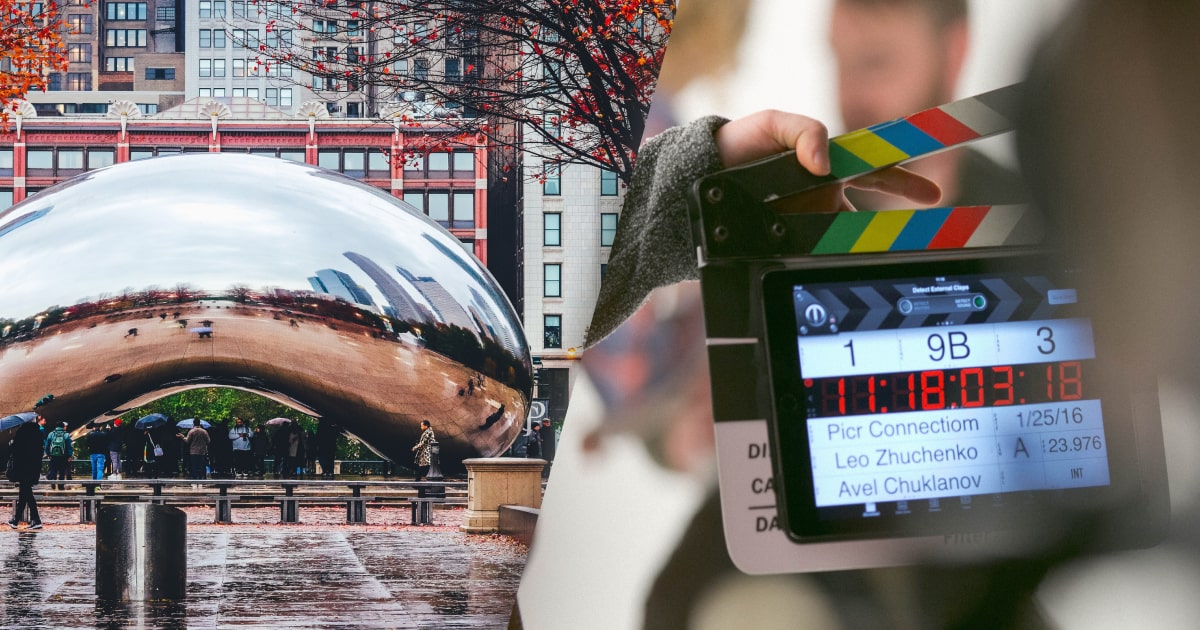 From the gritty cityscapes of Christopher Nolan’s The Dark Knight to the carefree street dancing in Ferris Bueller’s Day Off, with countless music videos and photoshoots in between, Chicago has long been a favorite shooting location for productions big and small.

But before you can shoot your next commercial, music video, or feature in the Windy City, you’ll likely need to obtain Chicago film permits.

In this post, we cover all your essential questions about Chicago filming permits — what they are, what they cover, how to apply for one, and how much Chicago film permits cost.

If you’re interested in getting a Los Angeles film permit, we recommend checking out our free ebooks on LA film permits and New York City film permits.

What are Chicago film permits?

A film permit is an official certificate from a municipality that gives permission for filmmaking activities to take place. Film permits are an essential tool that cities like Chicago use in order to balance the needs of on-set film production with the needs of the surrounding community.

If you’ve ever applied for a Los Angeles film permit or an NYC film permit, you may be pleased to learn that the process for getting Chicago film permits is much simpler. Chicago film permits are typically not required for smaller handheld shoots like documentaries, B-roll, and other low impact productions that won’t interfere with vehicular or pedestrian traffic.

However, if you have larger equipment, need parking privileges, or will utilize stunts, you likely will need to get a permit from the Chicago Film Office .

Permits aren’t one-size-fits-all, however. Certain activities like stunts may require additional scrutiny. Other activities may require the assistance of city personnel.

What is the Chicago Film Office?

The Chicago Film Office is the main office in charge of issuing Chicago film permits.

A division of the Department of Cultural Affairs and Special Events, the Chicago Film Office aims to attract production of feature films, television series, commercials, documentaries and all other types of screen entertainment to the city.

As such, the Chicago Film Office is a one-stop resource for filmmakers, equipped to handle all Chicago production needs including permits, city services, and logistical support.

Do you need a permit to film in Chicago?

It all depends on the size and specifications of your production.

If your production utilizes stunt work or if you’ll be filming in a public place, yes. If you need parking for production vehicles, probably. If you are a wedding photographer utilizing one of the City’s many public parks, you’ll probably need a Chicago photography permit. If you’re a small crew with handheld equipment, you might not need a Chicago film permit at all.

In a nutshell, Chicago filming permits are required for any production filming on streets, sidewalks, alleys, and other public properties, especially when your shoot will impede foot or vehicle traffic.

If you have any doubt about whether or not your production requires a Chicago film permit, you can look up detailed information on the Chicago Film Office website.

How do you get Chicago film permits?

The application process for Chicago filming permits breaks down into four simple steps:

If it’s your first time applying for a Chicago Film Office film permit, you will need to create an account. After your account has been established_,_ follow the prompts to complete your application.

2. FILL OUT A CITY SERVICES FORM

Chicago film permits require that you have production insurance.

Prior to your shoot, you’ll need to submit a current Certificate of Insurance (COI) from your insurance broker to the Chicago Film Office by email. Your COI, along with the City Services Form, Community Relations Notification Leaflet, and a brief description of your project can be sent to filmoffice@cityofchicago.org.

The insurance requirements for Chicago filming permits are simple: productions must have at least $1,000,000 in General Liability insurance and must name The City of Chicago as additional insured, a standard requirement for any production insurance policy.

Additionally, if your production is hiring police or fire personnel, you must have workers’ compensation insurance.

Just as you would if you were moving into a new neighborhood, when you are shooting at a new location it’s important to be a good neighbor. As a producer, that means it’s your responsibility to notify nearby residents and businesses before your shoot.

To help facilitate timely notification, the Chicago Film Office requires productions to submit their leaflets for review prior to distribution. Leaflets should be on company letterhead with a business address and contact phone number and must include the following information:

Once your leaflet is received by the Chicago Film Office and approved by the Department of Transportation, you can begin posting. This should be done as early as possible to provide ample notice to neighbors, and at minimum must be done 48 hours prior to your shoot.

If you’re filming in the Chicago Park District, Millennium Park, on historic Navy Pier, or a location run by the Chicago Transit Authority, you’ll need to obtain separate filming permits.

The fees, application process, and regulations are different for each location, so you’ll want to check the location’s specific permitting process before shooting in any of these places.

For example, a Chicago Park District film permit scales in price based on the size of your crew and separate Chicago photography permits are required for professional still photographers snapping photos in any of the City’s public parks. That said, almost all Chicago Park District film permits require production insurance like the Chicago Film Office.

What is the term covered by a Chicago film permit?

A Chicago Film Office film permit covers one day of filming at one location. If your shoot will run several days at a single location, you will likely need to apply for separate Chicago filming permits for each day.

Do you need separate Chicago film permits for each location?

Yes. As with multi-day shoots, if you plan on shooting at multiple locations in the city, you’ll likely need to obtain separate Chicago filming permits for each location.

How long will it take to get my Chicago filming permits?

All said, getting a film permit requires time: time to get an insurance policy that works for your production, time to write a quality application, and time to allow the Chicago Film Office to review your permit application. Starting early, and working with a knowledgeable production insurance broker can make the process a breeze.

How much do Chicago film permits cost?

Chicago filming permits are $250 per day/per location. For student films and independent projects, the fee is $25 per day/per location upon verification. For the specific location permits outlined above, like the Chicago Park District film permit, fees vary depending on the size of your film crew and other factors, but begin with a minimum $35 application fee.

However, as mentioned above, many small productions don’t require Chicago film permits at all. If you’re unsure where your production falls, check the Chicago Film Office website and other pertinent city resources once you have a good sense of the size and scope of your shoot.

Getting a Chicago Film Office film permit is a fairly straightforward process meant to ensure film productions and local communities have a mutually beneficial relationship, now and for years to come.

By leaving ample time, you can make sure your next production in the Second City is sufficiently and officially sanctioned.

Have more questions about Chicago filming permits? Give us a shout.

And be sure to check out our free ebook on Los Angeles film permits, covering everything you need to know about the LA film permit process.