Is Your Business AB-5 Ready? The Essential Guide 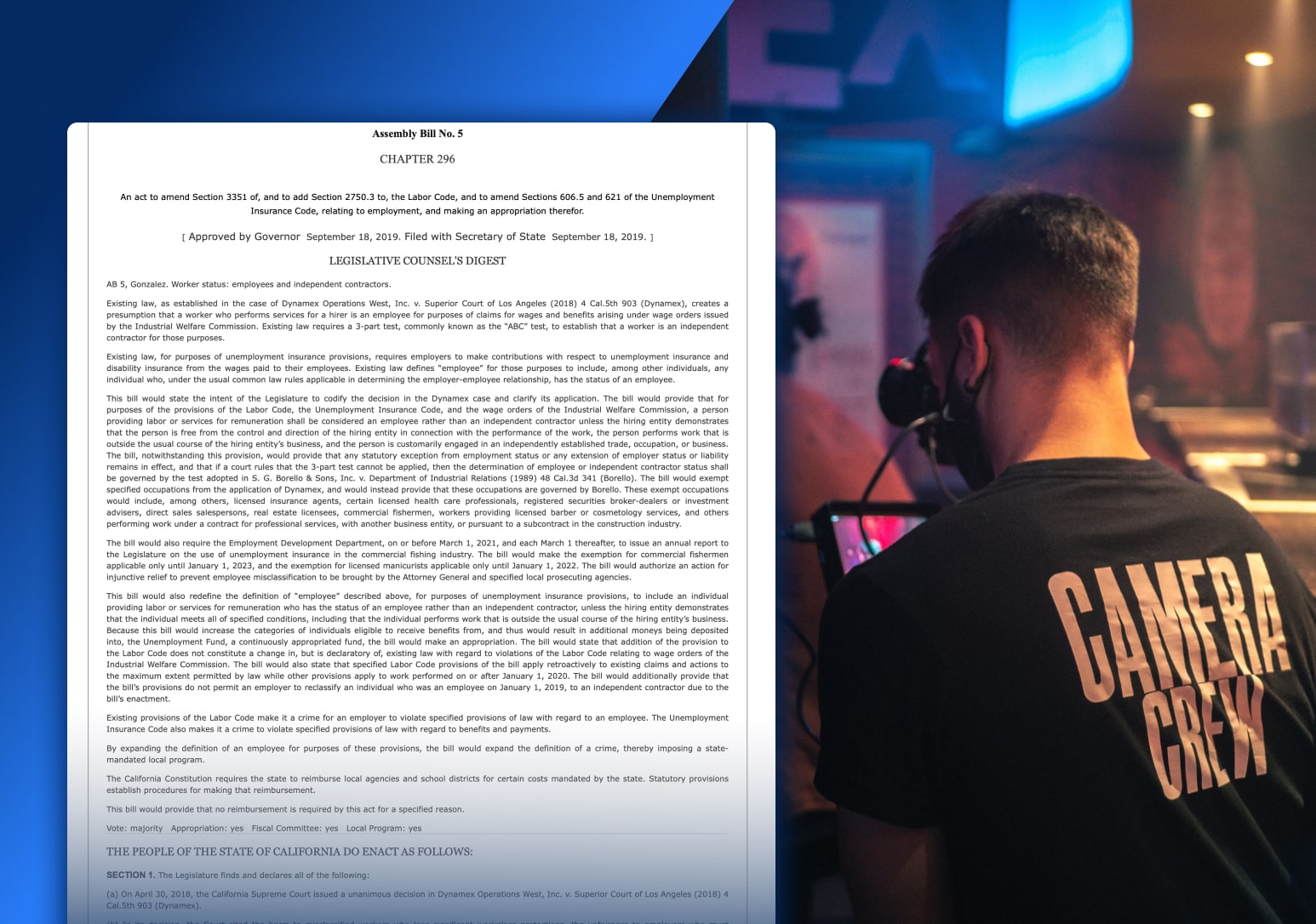 The latest earthquake to rock California has come in the form of a new labor law. As of January 1st 2020, Assembly Bill 5 (AB-5) has made it much harder for businesses to classify their workers as independent contractors.

In this post, we cover what AB-5 has changed, why everyone’s talking about it, and what you can do to ensure your business is AB-5 ready.

Also known as Assembly Bill 5, AB-5 has changed the requirements independent contractors must meet to be hired as such in California.

Before AB5, employers could often make the case their workers were independent contractors based on a loose thirteen factor test. This allowed many workers who should have been classified as employees to be hired as contractors. However, with AB5, that test is gone.

Instead, employers must now use the three factor ABC Test. While much more straightforward, the test allow little wiggle room for businesses to classify workers as independent contractors.

The hope is by passing AB-5, many gig economy workers will be hired on a more full-time basis, ending misclassification and converting some of the gig economy into meaningful employment.

Because most independent contractors do not meet these requirements, many businesses must now reclassify their workers as employees, including the entertainment industry.

Why is AB-5 monumental?

Unlike independent contractors, employers are owed far greater protections under the law.

This can include, but are not limited to: overtime pay, paid breaks, worker’s compensation, unemployment, anti-discrimination rights, paid time-off, health insurance, and many other employee benefits.

At the same time, these benefits must be paid for by you, the employer, not to mention employer taxes

This can quickly cost your business more money and paperwork for the same labor you once received from an independent contractor.

WHAT’S THE DIFFERENCE BETWEEN AN EMPLOYEE AND AN INDEPENDENT CONTRACTOR?

On the whole, employers have far greater control over employees than independent contractors. But to highlight a few key differences:

How do I determine if my workers are employees or contractors?

While the worker classification test has changed in CA, your independent contractors could still be hired, as long as they “pass” the ABC Test.

Essentially, if you can prove your worker meets all three of these requirements, you can make the case that they are independent contractors.

Absence of control exists if the worker is free from the direction or control of the hiring organization both by contract or agreement and in fact.

Do you forbid your workers from engaging with other clients, or allow them to take a loss? Then you might be exerting financial control.

If the courts can prove you control your worker, then you might be dealing with an employee.

2. BUSINESS OF THE WORKER

In order to be classified as an independent contractor, the worker must perform work that is “unusual” in regards to the employing organization’s business and / or off the hiring entity’s premises.

For example, an attorney working for a restaurant as outside counsel would be an independent contractor, since the work is unusual compared to the restaurant’s regular business and performed off-site at the attorney’s office.

However, painters hired to paint the inside of a bank would still be independent contractors. Even though they are performing their work at the employer’s office, their work is still unusual compared to the bank’s trade.

A great way to think about this prong of the test is to ask yourself, “Am I outsourcing?” If you can outsource a function for your business, it’s usually outside your usual business.

Various professions and trades are customarily independent contractors available on a per job basis, since they have their own business identity and engage in business for profit on the open market.

The Department of Labor also looks at what they call “economic realities.” The more dependent the worker is on a particular employer for income, the more they lean towards employee status.

Basically, if your workers do the same function for many other businesses, they are likely an independent contractor.

How do prepare my business for AB-5?

In order to avoid fines and keep your business operating as usual, it’s crucial to adjust your business for AB5 as soon as possible. Here are 5 things you can do to best prepare yourself.

With any new law, changes will likely come after it’s enacted and interpreted by the courts. Because the language of AB5 can be so broad, it could likely see amendments. By reading articles like this and subscribing to our newsletter below you’ll get the latest updates on AB5 as they become available.

Whether you have a lawyer on call or use a service like LegalZoom, having a lawyer you can talk to is paramount. With AB-5, you’ll want to ask your lawyer if any of your workers could be reclassified under the new law. You may also want to reach out to a payroll specialist, who can vouch to how the law will likely affect you.

3. TALK TO YOUR PAYROLL COMPANY

While your payroll company should have already reached out to you about AB5 already, you should get in touch with your paymasters. They can advise you on whether you need to reclassify and, perhaps more importantly, give you an estimate of how much you’ll have to spend on payroll.

If you don’t have a payroll company, you may want to consider taking one on.

There’s no getting around the fact that many workers will have to be re-classified. By planning to reclassify your workers as soon as possible, you can figure how much the switch will cost you. You can also reach out to payroll companies, who are more than happy to walk you through how much the additional benefits will cost you. Once you do, use a software like Wrapbook to easily classify your workers correctly.

If you must hire your independent contractors as employees, adjust their work schedules accordingly.

While an independent contractor may cost you a flat fee of $400 a week, a part time employee can cost you the same amount in a few hours when you factor in benefits, paid breaks, and employer taxes.

As with most endeavors, it’s often better to be safe than sorry.

While AB-5 may disrupt your business, the upfront cost of switching is a better option compared to the potential fines.

Still curious about how AB5 might affect your business? Reach out to us.