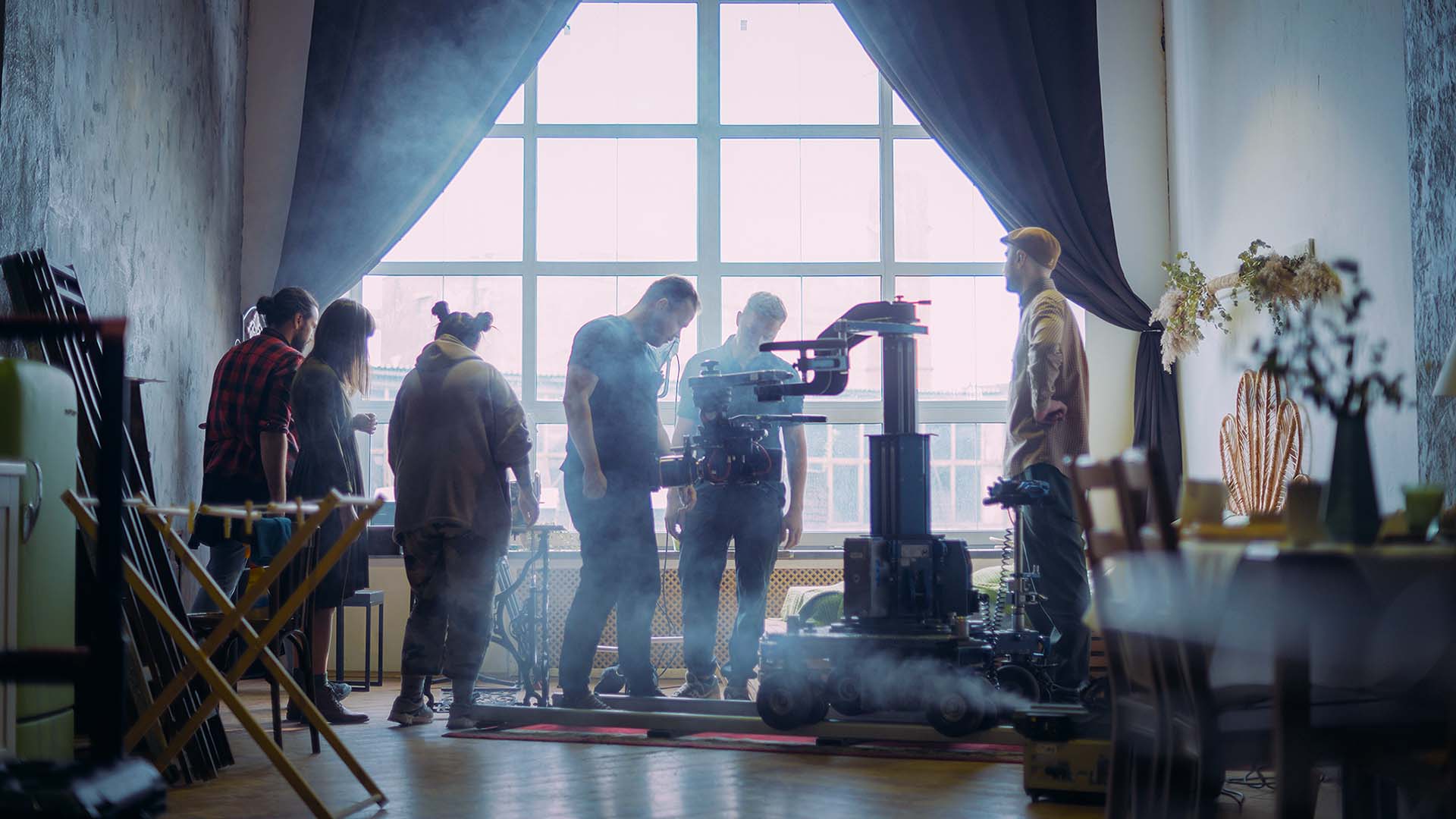 Not to be dramatic, but crewing up for a production is the most critical part of any project.

Sure, you need to have the funds to produce the project in the first place. But if you don’t have the right crew, it’ll be at best a headache for you, and at worst a total dumpster fire of a production. We don’t want that!

Yes, finding film crew members is incredibly important for the success of your production, but it doesn’t have to be a stress-inducing endeavor.  We offer a step-by-step guide of how to hire film crew members. When we’re done, you’ll have a crew of experts you’re EXCITED to spend a night shoot with.

Let’s start with knowing how to prioritize!

1. Know your crewing up order

Not that it’s set in stone, but there’s typically an order to which you hire film crew members.

Just to get this out of the way, though… It’s fine to hire out of order if you know who you want for certain positions. Maybe you got to know a particular makeup artist or caterer on a previous project and want them to crew on yours. If that’s the case, great. The crewing up process can feel less daunting when you secure some individuals right away, even if out of order. You do you.

But generally speaking, you start with your above-the-line crew. That includes the director and additional producers. We’re focusing on crew only for this article, but your lead actors are also considered above the line. Because you need them so early for a given project, you’ll probably be looking for your director of photography and production designer next.

Once you have those roles secured, lean on them for help as you continue to hire film crew members. We’ll later discuss referrals when hiring your crew, but since we’re talking about these specific positions right now, ask your director and DP for their input on other roles.

A director will want say in who their cinematographer or production designer is, just as the cinematographer will want to okay anyone working directly with them as well. In fact, they might even stipulate that they only work with a particular 1st AD or AC when hired. This can be a blessing in disguise, as it takes one more to-do off your crewing up list.

To get back to the order in which you hire film crew members, next you should look at your below-the-line needs, and that’s… everyone else. Again, if you can ask your new hires for help in securing these crew members, do it.

Otherwise, pending your production budget and its impact on how you hire film crew members, you’ll need to consider filling the following roles:

And that’s just the core roles of your potential principal photography crew. Depending on the scope of your project, you might also need to fill roles such as an intimacy coordinator or an on-set VFX supervisor. It all boils down to the specific necessities of your shoot.

That being said, do yourself a favor and lock down your major post positions early on, like the post supervisor, editor, composer, and sound designer so that you aren’t hustling to find them on short notice.

Yes, it’s a lot, but you really do have options as you hire film crew members, which we’re about to get into!

Is this your first crewing up rodeo? We got you.

Even if you’re a new producer, you likely have a list of crew members on hand from previous productions. For instance, if you are using Wrapbook for your payroll and onboarding needs, you have easy access to a digital film crew list. Our film crew list template offers a clear and comprehensive breakdown of all your professional contacts.

Truth be told, you may not want to work again with everyone on that list, but it’s a great starting point for your crewing up needs.

3. Get referrals for hiring your crew

Let’s say that even after referring to your list of contacts, either the people you want are booked for another gig or you would rather not use some of the people on that list. Or maybe because this is your first time producing a film, that list wasn’t long to begin with. Now what?

Now you can turn to your professional friends for help. After all, it’s always about “who you know” in this industry, right? So if you still need a director, cinematographer, or any other crew member, ask the people you know and trust who also work in the business.

When you do, though, don’t get only a name and number. Ask questions! If you get a referral for someone, ask if the person who referred them has actually worked with them before. If they did, how were they on the job? Were they competent? Did they need any hand holding? Were they communicative? Easy to work with others? You get the picture.

Your project might be a few days or a few months. In either case, you want to hire film crew members who both know what they’re doing and are pleasant to work with.

4. Look to your networking contacts

Your crewing up list has been exhausted as have your referral sources, but you still have to hire film crew members for your production. What to do?

In some cases, hiring your crew might require reaching out to people whom you wouldn’t necessarily call friends but with whom you have some professional overlap.

This means the people you may know through:

Or you might have professional groups that you’ve used for networking through which you can source crew members. Just tread carefully. Taking referrals from networking acquaintances – rather than trusted colleagues – means you should still strongly vet the person they recommend. Some questions to ask:

Your networking contacts may or may not work out as you’re hiring your crew. Either way, the interview process can still offer invaluable practice as you move on to your next crewing up resource: production crew websites and databases.

Producers have a handful of databases and websites from which to choose for finding film crew members. Think of the following options below as Indeed or ZipRecruiter – but for film crews.

Acme Directory for Film + Television offers a comprehensive database for both crewing up and finding basically anything else you might need for a production from costumes to props to equipment rentals and more.

Below the Line is an online publication with the latest industry news, but it also offers a search option for finding film crew members. That means the person doing the search must input information such as the crew member’s name, department, and affiliations. It might be a more time-intensive task than you would ideally want, but it’s a crewing up option nonetheless.

For more than 30 years, Crew Connection has been making it easier for producers to hire film crew members. The site’s database offers crew options from pre-production to post for projects with needs for drone crews, field production, still photography, and beyond.

More of an app person? Meet CREW UP, a New York City-based application that provides comprehensive options for hiring your crew. You can post your crewing up needs with rates, message and book crew members, and refer back to the app to source former hires.

EntertainmentCareers.net might take a little more legwork when it comes to hiring your crew, but it can be well worth the time spent to post your needs. The site is all-inclusive when it comes to job postings; it has industry positions ranging from office work to on-set gigs and everything in-between. It also provides three different crewing up categories – low/unpaid/deferred, unscripted/reality TV, and traditional – for producers in need.

Hollylist is similar in many regards to EntertainmentCareers.net in that the onus is on the producer to post their crewing up needs. That being said, Hollylist is quick to post those listings so that you can hire film crew members as soon as possible.

“The world’s largest network of creative professionals with over 2.4M members.” Mandy has long been a mainstay for finding film crew members.“ Not a bad option for hiring your crew. You have two choices with Mandy. One, you can post for specific jobs. Two, you can search the site’s extensive database of crew professionals to find the person you need for the job.

ProductionHUB is extremely similar to Mandy in that you have multiple options to hire film crew members. Explore ProductionHUB’s in-depth database of crew according to department or post what you’re looking for on its site. Either way, it’s another great crewing up resource.

Last on our list of databases to bookmark for hiring your crew is Staff Me Up. It’s another site where you can post your crewing up needs or go through the Staff Me Up database of listed crew members both on its site or app. Staff Me Up is comprehensive – and best of all – free for job posters to use.

There’s a saying in politics: “Personnel is policy”.  The people you hire dictate what gets done, so you need to make sure you’ve got good people working on your film shoot. This is true if you’re shooting an indie film, a music video, or producing a live event.

Now get out there and build your team!