The Benefits of Hiring Local for Out-of-Town Shoots 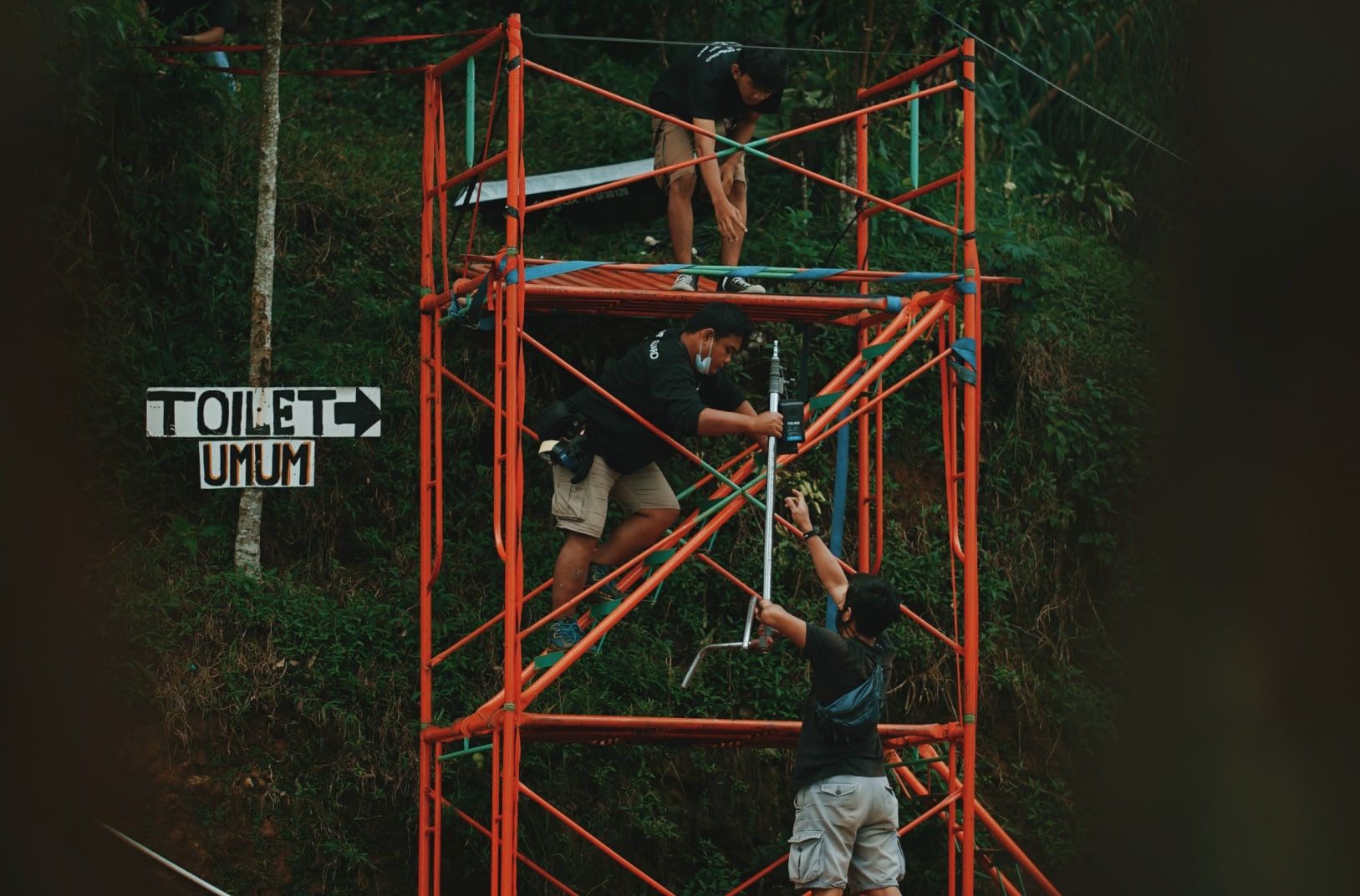 When it comes to hiring a production crew, a producer has to take every last detail into account. And budgeting for that crew is a big one. If you’re planning to shoot your next project out of state or even far out of town, will you fly an entire crew out with you to support your director’s vision? Or, will you hire locally?

Respecting the director’s wishes is important, but when the budget is limited, hiring locally might just be the right option. Though, the many benefits of hiring locally extend far beyond saving your production a few dollars on plane tickets.

Let’s follow our theoretical producer, who we’ll call Jess, as she navigates the throes of production logistics to discover all of the pros of hiring local.

Let’s start with the obvious.

If you have ever planned a vacation for yourself, you already know that buying plane tickets is the easiest part.

The hardest part is everything else that comes after that critical first step--- with all kinds of big and little costs adding up along the way.

Turns out, flying a crew in and out of a location can sometimes become a weird Tetris game of logistics.

Not just money will be spent. It will cost time and energy, too.

Maybe the movie they’re shooting takes place in a very remote area out-of-state. This could cause the DP’s trusted gaffer to charge a bit more than their standard day rate.

But regardless, Jess needs to fly them from location A to location B, which sounds pretty easy at first, but it generates a series of secondary questions in turn:

Taxis, Ubers, Lyfts, or any car rentals, can quickly become more expensive than the plane ticket itself.

From organizing carpools to a shuttle system, to making sure there is a ride-share network in place in the city where the project is shooting, to what the distances look like because they will most likely reflect on the price of the ride, Jess has to weigh all of these factors (and more) to figure out how they might impact the production’s budget.

However, working with them and the UPM to ensure each detail stays within budget, still ultimately falls on Jess.

Oh, and she likely hired a production coordinator or UPM locally. Why?

Well, there’s no real reason Jess needs to pay airfare for a position that could easily get started before Jess even flies in. (Now, if you're a fully staffed production company with your own manager or coordinator, it might make sense for you to fly them in).

Additionally, Jess also knows that standard practice for travel days is to pay each crew member a full day rate as well as travel expenses, which could include a meal at the airport, checked bags, or insurance if transporting special equipment.

These finer details about what Jess will pay for, will likely be outlined in a crew deal memo of sorts.

But regardless, if you’re hiring locally, most of these questions simply disappear.

In terms of equipment, what about pick ups and returns? Who will pick up the gear and when? Should they fly in a day earlier? Who will do returns? Will they have to stay a day later?

If she hires locals, Jess doesn’t have to worry about this. She can use her local crew to handle the pick-ups and returns, no problem.

But, travel costs are only part of the equation.

We’ve established that Jess has to fly in several people. Now, she also needs to find everyone a place to stay for the duration of the shoot.

Maybe Jess’s best friend lives in the area and offered up her guest bedroom.

Maybe the director also knows someone there who is okay with him crashing on their couch for a couple of weeks.

But what about the DP and the gaffer? What if the DP wants their own room and knows their gaffer has a snoring problem?

Just like with the plane tickets, booking accommodations also comes with a series of logistical questions…

How many rooms do you need? Can you get a discount on rooms? (Also, on commercial shoots, are you responsible for also booking rooms for your clients)?

What about food---will you be responsible for meals on off-days too?

…But what if Jess (or you) hires locally?

Obviously, finding accommodations for a director, a DP, and a gaffer isn’t rocket science. And is generally, completely worth it. But, you can see how complicated this might get if you choose to bring in non-locals for each position.

3. Reliability and the home court advantage

As a producer, not having to pay for your crews’ lodging is great. But your crew knowing the area they work in is priceless.

Locals are more likely to be familiar with the area --- the ins and outs of filming locations, traffic patterns, safety issues, distances, parking, or even permit knowledge.

It’s far less likely for your local crew to get lost or arrive late to set.

And because time is money, Jess, like most producers, likes to start on time.

On top of basic time sensitivity, if Jess is in a pickle in the middle of the shoot day, her local crew is more likely to think on their feet and provide her with fitted and quick solutions.

Which brings us to the next point..

Being able to tap into local crews’ networks is another major benefit of hiring local.

Today, these networks are roaming the country as film students and seasoned industry professionals alike, and can be found almost anywhere.

Film students will work for relatively inexpensive costs and, depending on where they are, some will even have a decent level of training. They will also certainly have friends who can jump in if the production suddenly needs extra hands.

Crew members with more experience have access to local vendors, additional crew, and might even be able to negotiate prices on your behalf, or more quickly secure rental gear.

Think of it like going on vacation somewhere.  Aren’t you more likely to trust a local’s recommendations, warnings, and advice?

Where are the best hole-in-the-wall restaurants? What’s the best way to travel across town? What areas aren’t so safe at night? Which businesses should you avoid?

Jess could use this argument to convince her director to hire a local DP, for instance, who in turn could hire their own local gaffer. And if the gaffer suddenly can’t make it to set, Jess can trust they’ll be quick to recommend someone just as reliable who can replace them.

And maybe the DP has a cousin who can throw a mean catering service.

Wouldn’t that be convenient!

Depending on your project’s needs, you’d be amazed at the variety and specificity of local talents, that is, if you’re willing to do a little bit of research.

Obviously, this isn’t specific to hiring locals, but you can find some pretty uniquely talented people all over the world.

A VFX studio that specializes in horror productions?

A food and liquid stylist?

Amazing artists can be found anywhere, even in the most remote of places.

This is true even more so today, as many states are competing with California for their share in the industry.

New Mexico and Georgia, for example, are now used to heavy film industry presence, and their roster of local expertise in any given department is arguably just as impressive as the Golden State’s.

6. Hire local and take advantage of tax breaks and credits

And tax credits can save a production big bucks.

Hiring a local crew on your next project means creating more jobs and bringing more money into a given state. Because many state governments are fully aware of this fact, they’ve instituted credits and incentives to entice productions into their borders for these exact reasons.

Georgia has enticing tax incentives to offer productions, on top of giving them access to high-caliber local crew.

But the Peach State isn’t the only state who wants to encourage local hiring and economic growth spurred by the film industry.

Other states are emerging with their very own menu of appetizing credits and tax incentives, like New Mexico, Louisiana, and even Michigan. With of course, New York and California providing their own tax incentives.

Just like Jess, make sure to check out the local film commission page for each state to see how exactly hiring local might be beneficial to your budget.

The cons of hiring local?

Of course, there will be times when hiring locally has its weak points.

For instance, a local crew member who doesn’t know you, may end up finding another job at the last minute, and bail. Though, realistically, this can happen with anyone.So it’s always best to reach out to a few people for the same position to ensure you have a back-up.

Keep a film crew list handy, or if you use Wrapbook, anyone you’ve ever worked with will be thrown into an automatic rolodex for your convenience.

However you stay organized, just be prepared for the worst. Ghosting is an unfortunate reality of working and hiring others.

And if your next project isn’t a film like Jess’s, hiring locally may even be of higher consideration. For instance, budgeting and staffing for live events can be a beast all its own. Hiring locally here might make the most sense.

It means enlarging your network, discovering new work cultures, and even making professional or personal connections that will last you a lifetime.

But however you hire, locally or otherwise, ensure you’ve ironed out all of the details ahead of time. Clear up exactly what you will be responsible for with a reliable crew deal memo.

How to Calculate Payroll Taxes

If you’re an employer and need to know how to calculate payroll taxes for your employees, you’ve come to the right place.

You Can Now Actualize Budgets with Wrapbook

We're excited to announce you can now export your actuals out of Wrapbook into your Hot Budget or Point Zero account.

What to Do When Your Production Gets Flipped

Your production gets flipped. Now you may be wondering what to do and how to handle it. Read our guide to find out how to navigate union organization.