How To Fill Out the SAG Exhibit G Form 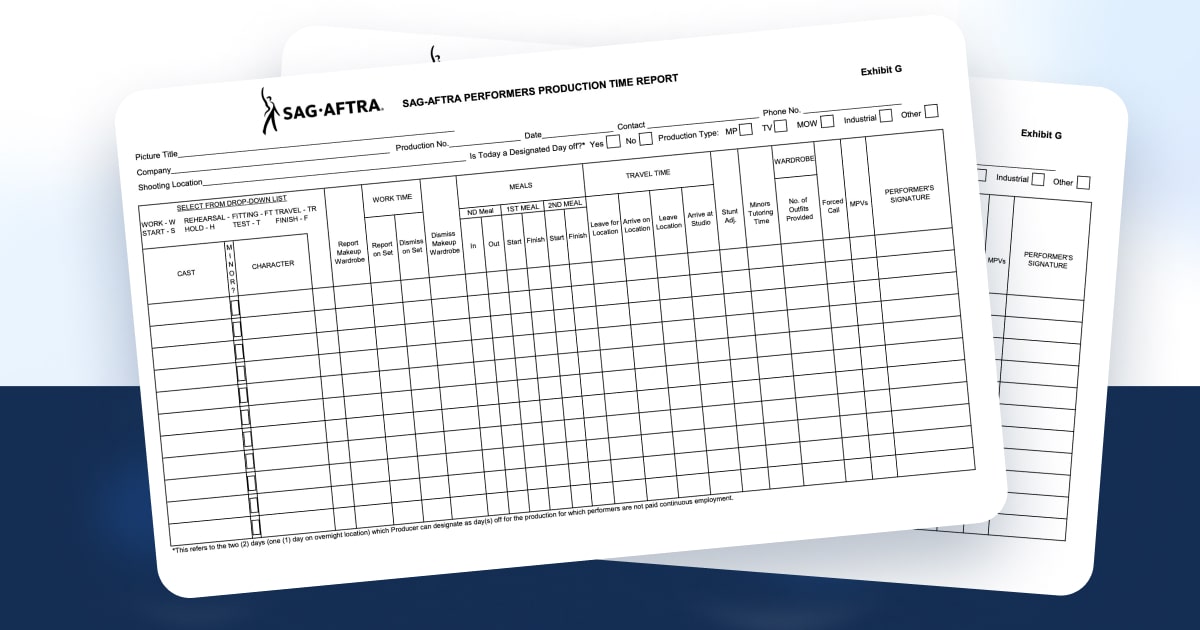 The SAG Exhibit G Form isn’t just a timesheet for your actors. It’s a daily ritual.

Also called the ‘G,’ the SAG Exhibit G is nothing more than a SAG-made timesheet for their actors, which the Guild can process to make sure their actors are paid correctly.

While containing a dizzying amount of columns and no pictures, the form is actually pretty easy to fill out once you do it once.

The form has a lot of detailed information about what has occurred in an actor’s day. The form is filled in and sent into a SAG office to tell them how the time was spent.

In this step-by-step guide, we show you how to use a SAG Exhibit G Form, along with some tricks and tips picked up by producers along the way.

Before diving into our step-by-step guide, be sure to download the latest SAG Exhibit G Form here.

While you can edit the form in your browser, we recommend downloading the form blank, and then updating it using a PDF reader. And now, without further ado…

1. Fill out the header

As veteran producers will tell you, you can fill out most of this information in advance, saving minutes on set – which can quickly add up. While “Shooting Location” and “Date” will have to be added on the day of shooting, use Preview or Adobe Acrobat to make a SAG Exhibit G Template.

Plus, they’re both free.

As for the actual fields you’ll have to fill out, the top of every SAG form has these sections:

As you may have guessed, this the title of your production. As you may not have guessed, it has to be the exact title, registered with SAG-AFTRA. In order to look this up, be sure to consult your SAG Payroll Company.

The “company” in question is your production company.

Along with “Picture Title,” this an identifying number SAG gives your production once you’ve been approved to shoot.

A representative of the production company, this is the key point of contact with SAG. It’s person responsible that the form is filled out, whether they do it themselves or foist it.

This is the address of where you’re shooting. It’s not the name of the set – i.e. “INT. CHELSEA’S BEDROOM.” Instead, it’s merely “PINEWOOD STUDIOS.” Mark multiple shooting locations here, if you do.

IS TODAY A DESIGNATED DAY OFF?

Actors need a day or two off per seven days of shooting. It’s one of many SAG rules. Just because your actors aren’t working doesn’t mean you have to fill out a SAG Exhibit G Form.

Designate your production type: Motion Picture (MP), Television Episode (TV), Movie of the Week (MOW), Industrial (aka commercials), or Other.

2. Add your actors and their status

What is a SAG Exhibit G Form without actors? On the left side of the form, you’ll find a place where’ll be asked to input your actors’ names, their character names, along with their daily status.

It’s truly as easy as it looks. If your actors are under 18, mark the minor box with a ‘x.’

Next your actors’ character names, you’ll see an empty box. Here, you’ll list your actors’s working status for the day.

While mostly intuitive, there are some nuances producers should take note. If you have any questions, reach out to a paymaster at Wrapbook.

W (Work) - your actor’s working, aka, acting on camera.

FT (Fitting) - your actor’s trying on costumes, off camera.

TR (Travel) - your actor is flying to location.

H (Hold Day) - your actor isn’t working, but can’t take another job. Usually, this applies to actors who are on location, but not being used. Usually, actors are paid for these days.

T (Test) - your actor is doing a screen test, but not acting.

F (Finish) - your actor’s last day of paid work on the project.

You can then use these letters in conjunction with each other.

Let’s say Brad Pitt is doing a cameo on your project (congrats, btw). That means he’ll act on camera, but also start and finish the same day. Therefore, Mr. Pitt would get the status SWF because he Started Work and Finished.

If a film set were an office, this part of the SAG Exhibit G form would be its punch clock.

All times are written in military time, or standard time with A.M. and P.M. distinction.

This is when your actor arrives to work. As the heading suggests, actors usually report to makeup and wardrobe to get camera-ready first.

This is the time your actor reports to set to work. ‘Work’ means rehearsing or acting. It’s usually the time the actor has finished makeup and wardrobe.

This is the time your actor has been dismissed from set and finished work. The actor then reports to makeup and wardrobe to get undressed.

This is when your actor has gotten out of costume, wiped away the makeup, and is finished for the entire day. It’s the moment your actor is cleared to go.

In addition to minimum rates, SAG-AFTRA has specific rules when it comes to meal breaks.

Typically, actors are required to have a meal break within six hours from arriving to the location. If the meal is missed, your production will have to pay a fine.

In order to keep your production compliant, you have to mark meal breaks meticulously so the union can determine violations.

This is where you log the times for the meal break. Since many sets run over time, it’s important to budget extra money for meal violations, just in case.

On particularly long shoot days, you may have to offer a second meal. This usually happens if you intend to shoot six hours after the first meal break. If you don’t have a 2nd Meal Break, leave a dash mark – that way SAG won’t think you forgot.

If you’re shooting on location, you’ll typically need to account for travel time.

In the eyes of SAG-AFTRA, travel time accounts for when an actor is commuting to a location outside of a “studio zone”. And yes, it counts as paid time.

In essence, “studio zones” encompass the greater metropolitan area of major cities, such as New York and Los Angeles. So, if your SAG actor leaves in Queens, and you’re shooting in 30 Rock, you’re not paying for their subway commute.

Actors traveling from outside their zone, then, are able to charge for their travel time, which you mark here.

This is the time your actors left their residences and/or hotels to get your set, outside of their designated zone.

Record the time the actor arrived.

Record the time the actor was released from makeup, and left the location.

If you’re shooting on a studio lot, this time will be identical to your “Arrive On Location.” If not, leave this box blank.

On the right side of the SAG Exhibit G, you’ll see a few columns where you can mark special events that happen on set. Most of these “special events” will result in SAG penalties you’ll have to pay.

For this reason, it’s crucial to hire a terrific line producer, familiar with SAG’s rules so you don’t go over budget, along with a knowledgeable SAG payroll company.

Mark this box when an actor performs a stunt on set.

Actors under the age of 18 often require “school time” during shooting. Here, you should mark how much tutoring time minors received.

Actors may sometimes bring their own costuming to set at the production’s request. SAG-AFTRA actors are paid a fee for each outfit.

A 12 hour turnaround time must be given to actors between leaving set and returning the next day. If you provide anything short of that time, you must mark it here. If you’re shooting outside of a studio zone, this time frame can be reduced to 10 hours.

No, not MVPs. Meal Penalty Violations occur every thirty minutes an actor doesn’t receive their first meal after six hours. So if actors missed their meal breaks by an hour, you’d enter ‘2’ MPVs for each actor, here.

The last thing you’ll need to do for each SAG Exhibit G is get your actors’ signatures before they leave set each day.

This is needed to make the form valid.

While most actors will be in a rush to get home, it’s important that they understand exactly what the form outlines. If asked, you should be able to give your actors a quick recap of the day when they sign.

WHO FILLS OUT THE SAG EXHIBIT G?

The long answer is that it usually falls on the producers’ hands to fill out each day on set. If they’re not around, it falls down to the project manager. From there, it can drop down to coordinator, or in extreme cases PAs.

8. Send it to your SAG payroll company

Once your actors have added their John Hancocks, it’s time to submit your Exhibit G to your SAG payroll company each week.

Unlike other payroll companies, SAG payroll companies are allowed by The Screen Actors Guild to process and run payroll. You can’t work with talent without them. It’s why we made a list of them.

Since actors must be paid weekly, you need to send your forms to your SAG payroll company as soon as you can.

If you’re using Wrapbook, submitting SAG Exhibit G forms is easy, and can be done directly from set.

On your production dashboard, go to ‘Documents.’ There, you can attach a screenshot or PDF of the day’s SAG Exhibit G From. Save it, so your paymasters can submit to SAG and calculate your payroll for you.

And since Wrapbook is digital, you can easily do this on your phone right on set.

Once you fill out a SAG Exhibit G a few times, it easily becomes habit.

Not only does it keep you compliant with The Screen Actor’s Guild, it determines how much you’ll pay your actors.

Now that you understand how to fill out a SAG Exhibit G, the next item on your list should be finding a SAG payroll company to process it.

Have any lingering questions about the SAG Exhibit G? Let us know.