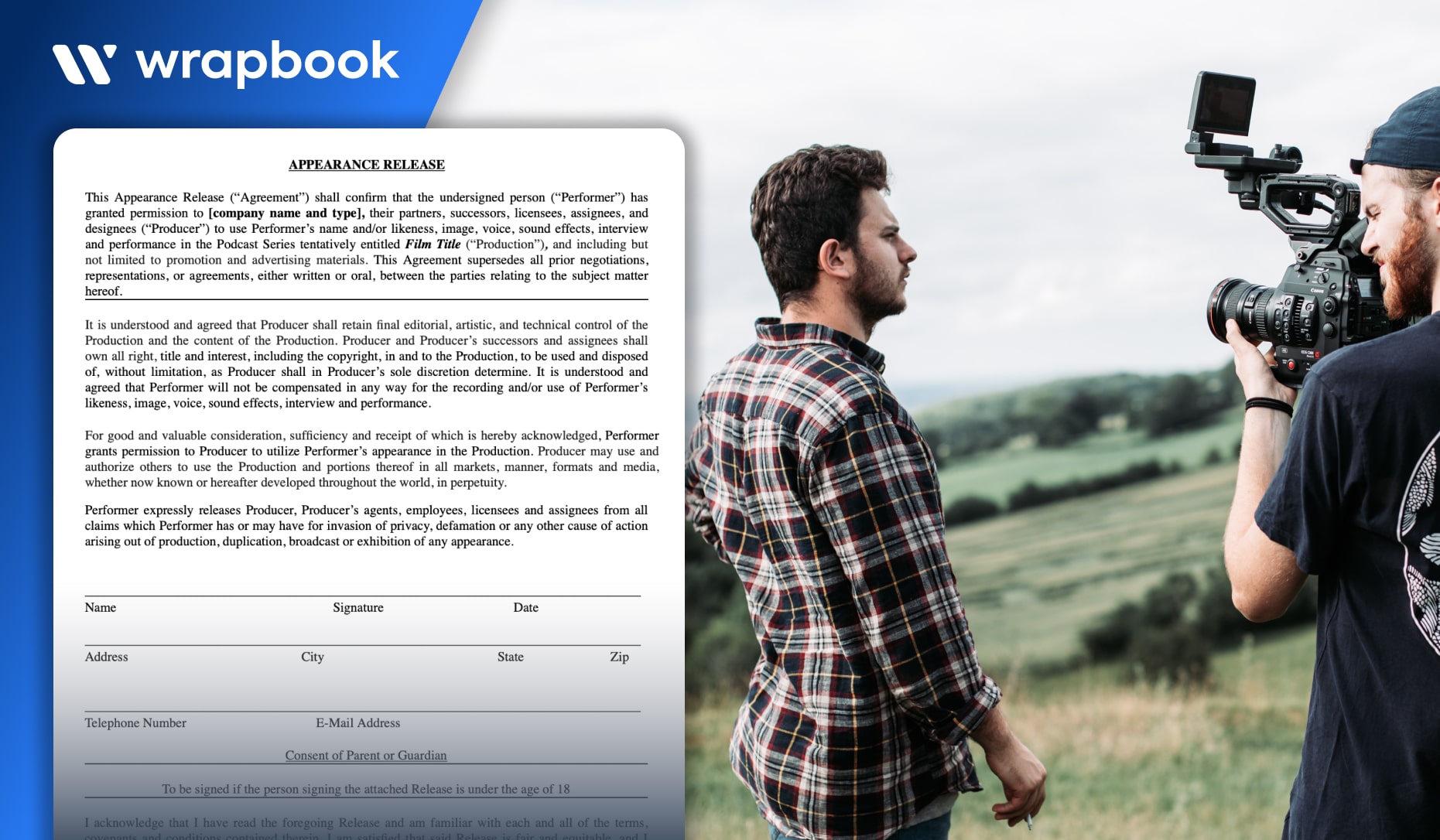 The basic talent release form is a powerful tool disguised as an unassuming document.

At just a glance, it seems like nothing more than a single sheet of paper containing yet another mind-numbing  legalese text. The same kind that producers encounter over and over again when dealing with the thousands of pages of forms and contracts that even a small production incurs.

But there’s a big difference between talent release forms and your average, legally binding document.

To put it simply, talent release forms have the power to make or break your entire production.

In this post, we’re going to tell you why that is and how to make it work in your favor by breaking down the last talent release form template you’ll ever need.

Before we jump in, be sure to download our free talent release form PDF.

And if the whispered dream of an easier production life piques your interest in the slightest, I highly recommend watching a Wrapbook demo. But if and only if streamlining the time-honored struggle of payroll and workers comp, interests you.

Now, with our talent release form free download in hand, let’s get into it.

What is a talent release form?

A basic talent release form is essentially a permission slip that authorizes you to use a talent’s image, voice, or any other specified features in your motion picture, show, or commercial.

But what is that purpose? To answer that, we need to ask another question:

What happens if you don’t have a signed talent release form?

The purpose of a talent release form is, quite simply, to prevent you from being sued.

You might be tempted to think that this is producer paranoia talking, but I promise you that my wall of crazy is (currently) empty. This is very much a real-world concern.

For example, let’s say you’ve spent the last year producing a low-budget independent feature. Your mini-masterpiece has finally graduated from post-production and- go with me here- it ends up being a massive hit on the festival circuit. Your little-film-that-could even has the much-coveted interest of a mainstream film distributor.

However, in the home stretch, you realize there’s a tiny problem. Somehow, in the insanity of production, you and your team forgot to secure a signed release form from your second lead actor.

If you’re lucky, it’s no big deal. You’ll simply go to the talent and have them sign a talent release form. Easy peasy. Nothing to it. Sign that distributor deal and get your film in front of the moviegoing masses asap.

On the other hand, if you’re less lucky, you could be in for a world of hurt.

The reality is that, technically, you don’t have permission to use that particular talent in your film at all. That means you’ve given up a whole heap of leverage and, with it, the very essence of control over the financial future of your feature film. The talent and their representatives can effectively hold your movie hostage, making demands that you may or may not be able to meet. If that happens, there’s almost nothing you can do about it. You can either pay the ransom, cut the talent from your film completely, or simply give up and cry into a big bowl of your broken dreams.

As you can imagine, none of these outcomes is attractive to distributors. Imagine, just like that, your little-film-that-could deflates into that little-film-that-should’ve-could’ve-but-never-did.

And the same logic applies to any project produced with commercial intentions. Not having a signed release form puts you and your production at major financial risk, no matter what.

In that sense, the devil is in the details, as they say, and you’ll want to make sure the details of your film release forms are in order before a potential misstep lands you in inferno-hot water. Don’t hesitate to seek the advice of a qualified entertainment lawyer to help you modify our free talent release form PDF to meet your specific needs.

Zooming out from the details, however, there are several basic characteristics considered standard on a talent release form. Let’s start with the most obvious:

The talent’s name, that is. One of the most basic stipulations of a video release form is that it allows you to use the talent’s name in connection with your project.

That probably seems like a no-brainer in regards to the project itself- whether it be a feature film, short, commercial, or anything else- but it’s important not to forget to consider the less immediate implications hiding just below this simplistic surface.

In most cases, permission to use your talent’s name should extend beyond the primary work. Yes, it’s incredibly unlikely that a performer would resist using his or her name in the opening or closing credits of your movie, but that’s not a guarantee that they’ll be jazzed when you use their name as the centerpiece of your promotional campaign. They may require additional financial incentive, which may or may not be the best move for your production.

In any case, it’s wise to handle that question up-front by making sure your talent release form specifies talent name use in any expected promotional materials.

Modern legal contracts have the oddly entertaining and mind-numbingly frustrating tendency of breaking their stipulations up into absurdly small and specific pieces. Of course, there’s a reason for that. If a contract’s loopholes are too large, a clever individual might dodge out of it on a whim, which could spell bad news for whoever they’re dodging.

In light of that fact, unless you’re producing a particularly dedicated remake of The Battleship Potemkin, it’s almost certainly in your production’s best interest to obtain permission specifically to use your talent’s voice.

It’s exactly what it sounds like (pun only partially intended). If you want to hear your talent speak, laugh, cry, or scoff in your project, get a signed release form saying that you can do exactly that.

For visual works, the most important permission granted by a talent release form is the ability to use the talent’s image and likeness. If you want to see the performer, you absolutely have to make sure this is covered.

Again, in most cases, this permission should extend beyond the limits of the primary work. You’ll need a specifically signed release form for image and likeness if you want to use, for instance, an interview with your lead actor as part of your film’s bonus features, promotional stills as part of your electronic press kit, or even a painted version of your villain’s brooding face on the official poster.

Think of it this way: if a given talent release form example doesn’t mention permission to use a talent’s image and likeness, put it down, turn around, and run away as fast as you can.

When used in a talent release form, “performance” can be an abstract, malleable term. It generally refers to the way an actress or actor portrays their character on screen, but it can also refer to other types of performance, like a musical performance, dance performance, or stunt performance.

The term is open to interpretation, but the key is your talent’s action. If your talent is doing anything- whether on camera or simply in voiceover- it could be argued that they’re performing.

Talent release forms are a simple, essential, and endlessly customizable production document. The bottom line in their use is to make sure that the I’s are dotted and T’s are crossed according to the specific needs of your production. So if you haven’t already, be sure to download a copy.

On literally any production, nailing your talent release forms is an imperative step toward making sure your project can be safely put to commercial use.

If you’re in the market for other useful production documents, check out Wrapbook’s guide to The Last Film Crew List Template You’ll Ever Need.