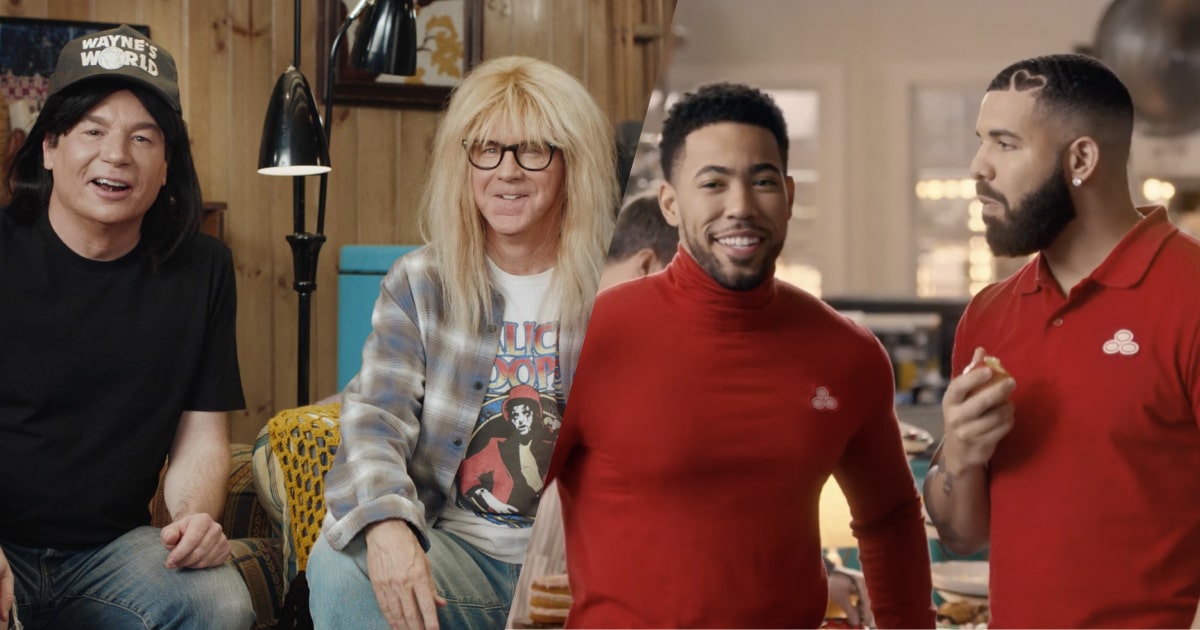 Welcome to the best commercials of 2021! Well, so far.

We might be just halfway through 2021 but this year has already proven to be a notable one for commercials. And while the Super Bowl tends to kick off the best commercials of any given year – and 2021 is no exception – plenty of popular TV commercials have hit the airwaves since.

So let’s jump in, shall we?

The best commercials are often the ones that can infuse humor into an otherwise dry topic to get an audience’s attention. Enter AARP. No one wants to be reminded of getting older, but this delightful commercial bypasses that fact of life by showing the AARP crowd and those who will be part of it in 40 years learning from each other.

How can you not be inspired by Kermit the Frog? The famous front man of the Muppets headlines this ad, instantly making it one of the best TV commercials of 2021. He cleverly uses his famous motto of “it’s not easy being green” to encourage others to do their part for environment conservation. We also get a cameo by tennis legend Stan Smith and a reminder from Yoda of “do or do not – there is no try.” An advertising slam dunk indeed.

Maybe you’ve done karaoke with your friends at the bar, but have you ever performed a duet with your car?

Allstate’s “Duet” ad has received a lot of attention over the last several months, easily making it one of the best Super Bowl commercials to come out this year – and the first of them that we’re covering among our list of current TV commercials of 2021.

The ad has a clever premise of showing the driver singing along with his automobile’s hood ornament after seeing the insurance savings he’s just received. But it’s the usage of the Pet Shop Boys’ song “Opportunities” that easily makes this one of the best advertisements of 2021.

Humor sells. But when you also throw into the mix a highly talented, hugely popular, and… uh… a very nice-looking Michael B. Jordan, you’ve got an instant hit on your hands.

And that’s exactly what Amazon did to create its “Alexa’s Body” ad, which has become one of the best Super Bowl commercials of 2021.

Simplicity – along with a truly unique and earworm-y musical accompaniment – can make for commercial greatness.

Without a single line of dialogue, Apple’s “Fumble” ad leaves an indelible imprint on the viewer as the heroine of the commercial desperately tries to save her iPhone from hitting the pavement… and fails. All the while, a catchy tune narrates her struggle. Together, it makes for one of the best TV commercials of 2021.

You knew it was going to happen. No way could we get through the Super Bowl without a commercial highlighting the lemon that was 2020 on account of the pandemic.

Bud Light took on that challenge with gusto, resulting in its “Last Year’s Lemons” commercial. Though the year itself left a sour taste in our mouth, with its impressive effects and balanced humor, this bittersweet ad is definitely among the best Super Bowl commercials of 2021.

Ah, nostalgia. Who doesn’t love a trip down memory lane? We do.

And during this year’s Super Bowl, Cadillac scored a touchdown (pun intended) for its beautifully enchanting ode to the Tim Burton classic Edward Scissorhands with Winona Ryder reprising her role as Kim Boggs and Timothée Chalamet as Edgar Scissorhands, son of Edward.

A commercial featuring Shaggy might not make it onto the list of best ads of all time, but it definitely gets one of the top spots of this year.

Also premiering during Super Bowl LV, this light-hearted commercial is among the long list of fun and memorable ads that Cheetos has produced specifically for the Big Game. In addition to the reggae singer, it features celebrity couple Ashton Kutcher and Mila Kunis. We’d say that alone makes it one of the best Super Bowl commercials of 2021.

As the pandemic slowly fades and the world returns to normal, people will soon be traveling again. Travel company Expedia is banking on this pendulum swing, creating one of the best commercials of 2021.

Featuring the effervescent Rashida Jones, this ad makes us all feel hopeful about not only exploring the world once more but also doing so safely and comfortably.

GEICO Insurance consistently pushes out great ads with many of them having become some of the best commercials of all time. Just Google “Maxwell the Pig” or “Spy Mom” as examples.

Well, they’ve done it again with their throwback to the ‘90s featuring none other than Lisa Loeb herself, whose song “Stay” was a staple of the decade. Putting a slight but very funny spin on her classic track, GEICO has once again produced one of the best commercials of 2021.

Oh boy. You know you have one of the best commercials of 2021 on your hands when it actually stirs up controversy over animated characters dancing.

You read that right. People have definitely taken notice of Grubhub’s “Delivery Dance” ad, which features multiple characters cutting a rug because they’re that happy that their food has arrived.

While some folks have had less than favorable responses to the ad, others simply adore it, and we happen to find ourselves in the latter category. Either way, given the attention this ad has garnered since first airing, it hands down has become one of the best TV commercials of 2021.

Meet Tony Bolognavich, King of Cold Cuts, who is none too pleased over the competition he’s facing from “Jimmy’s John’s.”

Yep, it’s another memorable ad that made its premiere during this year’s Super Bowl. With Brad Garrett turning out a fantastic performance as the Tony Montana of the sandwich world, this is easily one of the best commercials to have come out of 2021’s Super Bowl, not to mention one of the most popular TV commercials of the year so far.

The past year has forced all of us to spend more time at home, which has had at least one surprisingly sweet consequence – more sidewalk art.

Kohl’s has taken this resurgence of good old-fashioned chalk fun and turned it into one of the best advertisements of 2021. By showing how we all can still find a little joy as we navigate out of the pandemic, this charming ad gets us smiling with each view.

14. Progressive Insurance – “The Ad Where Nothing Happens”

Man, who knew that insurance companies would one day become the masters of commercial ingenuity and creativity? Like its competitor GEICO, Progressive has long held our attention as the producer of some of the best commercials of all time, many of them starring their famous rep, Flo.

Like several of the best commercials we’ve already mentioned, Progressive gives a nod to the challenging times we’ve all faced over the last year. But what feels like a relatively understated ad for this brand ends with its usual wink to the audience with an all-too-brief cameo by “3/5ths of *NSYNC.”

Another brand that’s banking on people wanting to travel again is Resorts World Las Vegas. Hence, its commercial that lays out exactly why Vegas is a premier destination.

With a catchy score, vivid visuals, and cameos from world-famous artists like Katy Petty, Carrie Underwood, and Celine Dion, the ad clearly shows potential visitors to Sin City that they’re ready and waiting for them to return. For its outstanding production value alone, we’re including this ad on our list of the best commercials of 2021.

Rocket Mortgage’s “Certain Is Better” ad has become one of the most popular commercials of 2021 and also features a famous face – actor and comedian Tracy Morgan. With his signature humor, he takes a family through all the scenarios where “pretty sure” just doesn’t cut it. Maybe not, but this commercial certainly does.

17. Samuel Adams – “Your Cousin from Boston Gets Vaccinated”

When a brand hits upon a premise that connects with audiences, it only makes sense that they would continue to give the people what they want. And what they want is “your cousin from Boston.” (Try saying that in your head without the trademark accent!)

Samuel Adams has enjoyed a great run with this series of commercials, and their latest installment continues with the titular character going in for his COVID-19 vaccination, which doesn’t necessarily go as planned. Though it only premiered in April, it’s already on our list of the best commercials of 2021.

We’re telling you…if you want to watch great commercial content, look to the insurance companies! Giving GEICO and Progressive a run for their money is State Farm, which has its own breakout star, Jake.

Premiering during Super Bowl LV, the brand’s “Drake from State Farm” has a host of famous faces in addition to Jake, including Aaron Rodgers, Patrick Mahomes, and Paul Rudd. Oh, and let’s not forget Jake’s stand-in, Grammy Award-winning rapper, Drake.

With this kind of star power, we’re confident that not only is this one of the best commercials of 2021, but also that it’ll one day make it onto the list of best classic commercials as well.

We’ve focused largely on the most popular commercials of 2021 that have made us laugh. But now...it might be time to get that box of tissues ready.

Another Super Bowl commercial, Toyota’s “Jessica Long’s Story” is nothing short of a tearjerker for all the right reasons. Interestingly enough, the commercial says nothing of what the brand sells and instead concentrates on the story of American paraplegic swimmer Jessica Long. Why? Toyota happens to be a U.S. Olympic Team sponsor. It also is a company that has made a truly memorable and emotionally impactful commercial.

Could there be a better way to end this list than with Wayne and Garth? We think not.

The last on our compilation of the best commercials of 2021 is the Uber Eats ad that encourages audiences to eat local with Mike Myers and Dana Carvey reprising their iconic roles of Wayne and Garth – and a cameo by rapper Cardi B!

While this teaming up of ‘90s nostalgia and modern-day celebrity may sound a little odd, it oddly works.

The year 2021 has certainly proven itself to be another standout for the level of creativity that goes into commercial production.

And to ensure commercial producers stay focused on the creative, Wrapbook makes complicated necessities, like payroll, a breeze.

Wrapbook’s all-in-one suite allows you to pay people with just one click and even handles auto calculations for union timecards.

So as you prep for your next shoot, consider Wrapbook for your payroll needs, so you can focus on making your next great commercial.

Better Budgeting Tips: How to Master Your Music Video Budget

Master your next music video budget with these budgeting tips from working music video producers.

How to Start a Management Company

Safe & Secure: How to Protect Your Production Company from the Inside Out