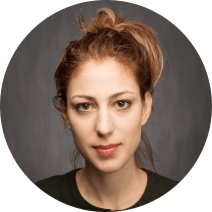 The Complete Guide to the SAG-AFTRA Taft Hartley Form 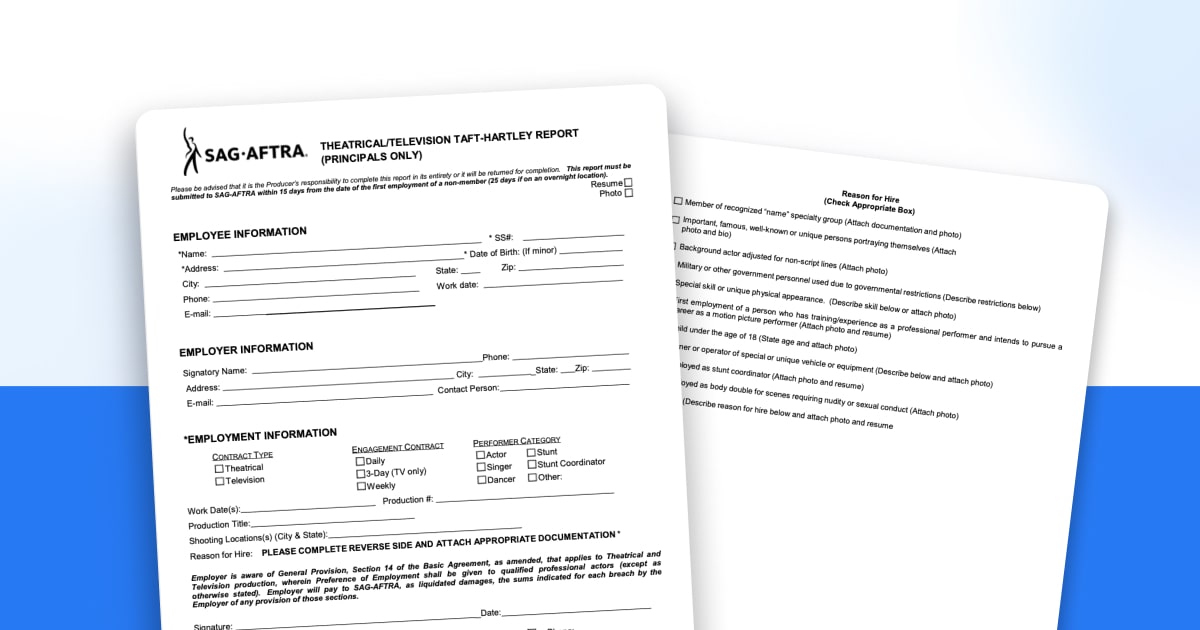 You’ve registered your production with SAG, received a project representative, and have your talent lined up. But if you want to cast a non-union actor, then you’ll (likely) have to get the guild’s approval through a SAG-AFTRA Taft Hartley Form.

Filing a Taft Hartley can be a fairly easy process for a producer to complete and a great opportunity for performers looking to get their SAG card. In this guide, we detail when and how to file a Taft Hartley for SAG along with a few exceptions to the rule.

‍*Note SAG-AFTRA is not affiliated with Wrapbook, but Wrapbook does seek to help those looking to fill out their forms.

Before diving into the ins and outs of Taft Hartley for SAG, be sure to download the latest version.

If you’re hiring a non-union actor for a principal role, use this SAG Taft Hartley Form here.

If you’re working with background talent, then you’ll need this version of the form.

What is a Taft Hartley Report for SAG?

A SAG-AFTRA Taft Hartley Report is nothing more than a document that producers file for non-union actors working on a SAG shoot.

Roughly 1-2 pages (depending on your SAG contract), the form includes basic employment and production questions, along with a “Reason For Hire” section.

Either you, a signatory producer, or your casting director must be the one to file the Taft Hartley Report into SAG-AFTRA within a set number of days from the performer’s start-work date – 15 days for a standard production and 25 days for an overnight location shoot.

In 1947, Congress passed The Taft Hartley Act to further regulate labor unions. It did a number of bold things like making it harder for unions to start certain strikes, and required them to pledge allegiance against communism (that last provision was eventually removed but still).

The act at large sounds a tad controversial and there is much more nuanced conversation to be had about it and workers rights, both historically and today, but that’s a much longer letter later.

Today we will just look at the act as it pertains to performers joining SAG-AFTRA, particularly on the SAG side: The Taft Hartley Report.

Filling out a Taft Hartley Report for SAG

While the SAG Taft Hartley Forms for principal and background actors vary slightly, all forms cover the same basic and production questions, along with a section where you must explain your non-union hire to SAG.

The four sections of each SAG-AFTRA Taft Hartley are:

Here, you list all of your talent’s personal information, such as date of birth, social security number, address, and email. Be sure to collect this information when onboarding your cast.

Here, you provide SAG with some basic information about your shoot and the nature of the performer’s role. Information includes: your production number, shooting location, the production title, work date(s), and the contract type.

Here is where you make the case for casting said non-union performer instead of a union one.

You may choose from a list of qualifying options such as “Military or other government personnel used due to governmental restrictions”, “Owner or operator of special or unique vehicle or equipment”, and more likely, “First employment of a person who has training/experience as a professional performer.”

How to file a SAG-AFTRA Taft Hartley Report

Once you’ve filled out a form, attach a copy of your performer’s headshot and resume and mail it off to your local SAG. They’ll then look at your submitted paperwork and give you a response usually within 3-5 days.

Above all, SAG will scrutinize the “Reason for Hire” section. While you may try to fudge your reasoning for bringing on a non-union actor, be careful – you may incur a fine. Also, don’t lie.

While it may be stressful, it’s worth advocating for emerging talent who you believe in. If that performer was on track to join SAG eventually and you can point to their body of work or training on paper, then you’ve got a good case to champion them!

While you should file your forms asap, you have 30 days after production wraps to send in any lingering paperwork.

If you are producing under a Student Film, Ultra Low Budget, a lower budget New Media contract, you can still cast a non-union performer – but they won’t qualify for a Taft Hartley.

When in doubt, always check with your project’s SAG representative for further questions and make sure you know what percentage of your cast must be SAG in order to meet the terms of your union agreement.

These are exciting times, for sure, but the uncertainty in the industry has had a few consequences for producers and performers, particularly when it comes to SAG Taft Hartley rules.

In the beginning of New Media, Taft Hartleys were allowed for many different sized projects. But, as the definition of this category grew, SAG tightened the coffers, first closing the New Media Taft Hartley gates entirely, then evaluating on a case-by-case basis, and finally establishing the current criteria:

Amidst the vagueness, my recommendation is to begin your signatory process as soon as possible so you can speak with your assigned representative and see where you stand.

SAG eligible vs must join

If your non-union talent has already worked on a SAG shoot, then dealing with the Taft Hartley forms for SAG-AFTRA becomes a little trickier.

Principle performers become SAG eligible after one Taft Hartley report. They can join the union after the production has been processed, or they can wait until they “must join.”

Once the performer becomes SAG eligible, the union outlines various tiers of participation that lead up to a “must join.” The gist is, after a certain amount of SAG jobs as SAG-E, the performer is required to pay a joining fee and officially join the union if they want to continue working on SAG-AFTRA projects.

This shouldn’t deter a producer from casting talent in various stages of joining. However, it is a good idea to start your SAG paperwork early in pre-production, so you can resolve any issues that may arise long before shooting begins.

Plus, SAG can also be helpful here, so give your rep a ring!

The minimum requirements for becoming SAG eligible vastly varies based on your performer’s contract. Background actors, for instance, only need to complete three days of background work on a SAG-AFTRA production to become SAG eligible.

Additionally, Background Taft Hartley Reports for SAG must also be sent directly to the Background Department. This is why you should always have a skilled producer and/or SAG-approved entertainment payroll company on call.

Getting your performers their SAG vouchers

Once your performers have completed their project, SAG will send them a notice of their eligibility if they’re principals. Background actors will receive a SAG voucher, which counts towards 1/3 of membership.

SAG says the Principal Taft Hartley Report will take at least 6-8 weeks to be filed. However, the union will not begin this process until production has sent in all of their final SAG production paperwork.

If your performer inquires about the timeline, make sure they know when principal photography wraps. Then, production has up to 30 days to submit final paperwork. Once paperwork is in, the 6-8 week clock can begin.

Once a Taft Hartley form has been processed, SAG will send each performer a letter in the mail indicating their eligibility to join. However, performers can check their status online at any time here.

How to avoid Taft Hartley fines from SAG

As long as you’re honest about your production and your performer, you should have nothing to worry about it. A lot of this goes without saying, but SAG-AFTRA lists these policy terms for producers:

Why SAG should create a Taft Hartley for multi-hyphenates

In the early days of New Media, some multi-hyphenate creators emerged from the depths of Youtube and utilized this contract to “produce their way” into the union.

There seemed to be a reproachful attitude about this behavior, which I believe to be misguided and institutional elitism at its worst. Instead of creating a budget floor, perhaps SAG could be the first union to champion emerging multi-hyphenates and embrace the actor/creator.

I don’t need to lay this out for the majority of readers here, but producing something at a professional level is a lot of work. Whether it’s your 1st series or your 50th, if you are a SAG production (which I’d recommend 99% of the time), you are signing up for months to years of work, requiring, at least, a business entity, an insurance policy, a form of payroll, talent contracts, a camera, possibly sound, and some kinda crafty.

If actors manage to jump through each of these hurdles, secure distribution, and produce something watchable, maybe, just maybe, that should put them in contention for a SAG card.

Whether you’re an actor trying to become SAG eligible or a producer trying to stay compliant, the Taft Hartley Form plays a vital role in the world of entertainment.

As with anything in entertainment, submit early and don’t hold your breath when it comes back the day before shooting begins.

If you have any lingering questions about SAG Taft Hartley Forms, reach out to us anytime.

Eden Perry is a creative and physical producer, and more. She currently resides in Los Angeles with her Dachshund, Ponce De Leon.