How AB 5 Will Affect the Entertainment Industry 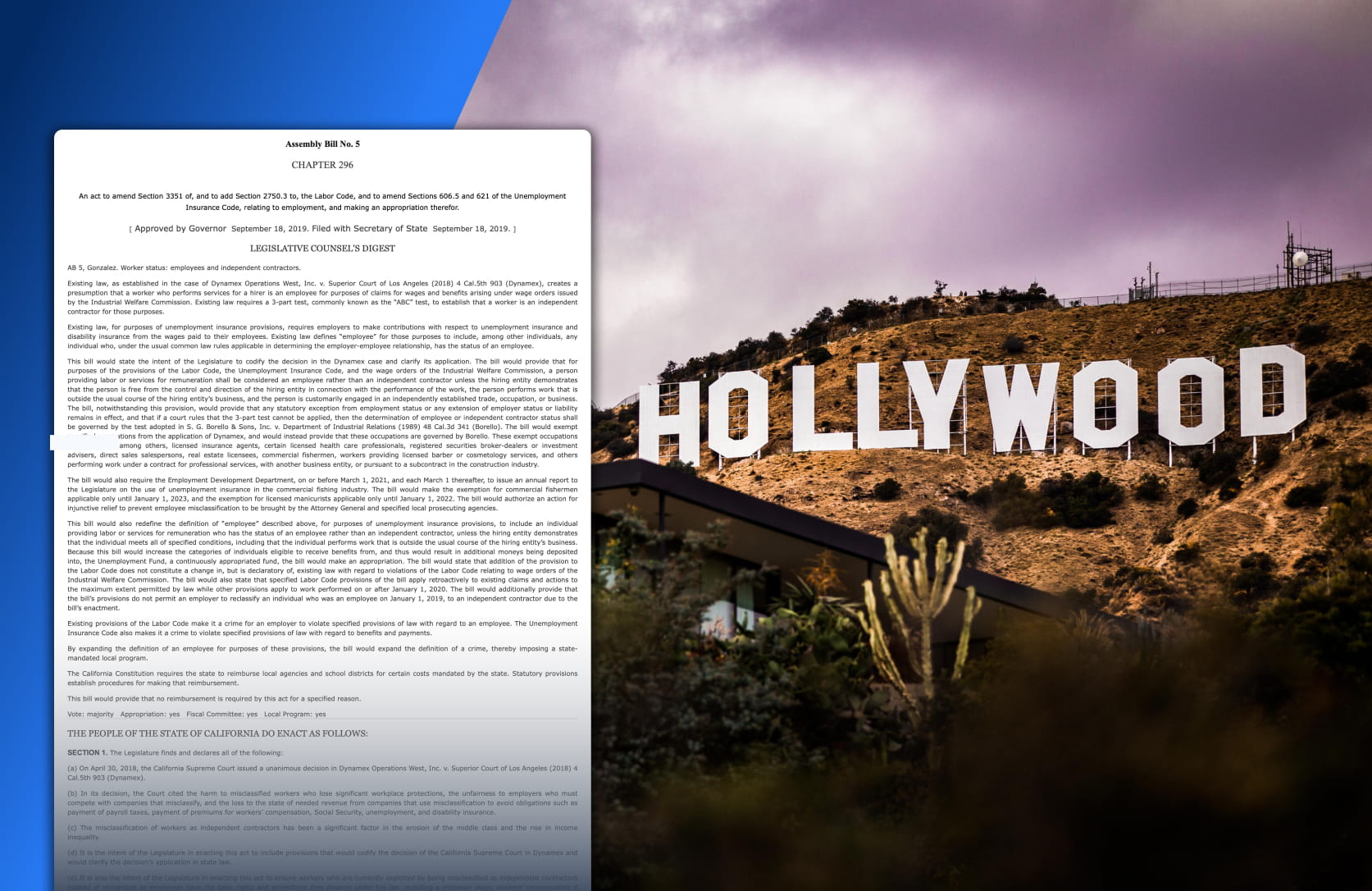 Everyone has been wondering how the new bill aimed to classify Uber drivers as employees will affect the entertainment industry.

Assembly Bill 5 (often shortened to AB 5) was signed into law by California Governor Gavin Newsom on September 18th, 2019. It will make it harder for employers to classify their workers as independent contractors.

Although the ride share business and gig economy at large are the intended targets, there will be ripples produced by the law into the California economy.

In this post, we recap what AB 5 has changed, what the entertainment industry is saying, and how it might affect your productions in California come 2020.

What is Assembly Bill 5?

AB 5 creates an assumption for employers to consider all workers as employees unless the employer can prove the worker’s role is a contractor according to the the state’s new labor classification test.

AB 5 may reclassify some 2,500,000 workers who had previously been misclassified as independent contractors as employees. It will also reclassify Uber and Lyft drivers as employees of their respective companies.

Being a misclassified worker is bad for the worker. Misclassified workers pay higher taxes, and don’t get other employee protections, like overtime pay, workers compensation insurance, sick days, paid leave and other benefits.

Employers who misclassify their employees as contractors will need to withstand the scrutiny of the California authorities and can expect fines for doing so.

If you want to read Assembly Bill 5 for yourself, make sure to check out the clauses and exceptions to the bill here.

Who is a Contractor Under AB 5?

AB 5 is placing a larger burden on employers to prove that their short term workers are not employees.

But just because the bill will make it harder for independent contractors to be classified doesn’t mean project based work will cease. AB 5 is merely changing the labor test used by the state of California.

Prior to the bill, California adopted the Borello test to determine whether workers were employees or contractors. However, as of January 1st, 2020, the new bar to cross will be The ABC Test.

Already used by U.S. Department of Labor, the ABC Test assumes a worker is an employee unless the employer can prove there is an absence of control, the worker’s business is unusual compared to the employer’s, and the worker is customarily engaged in a similar trade with many other business entities.

What this gets down to in specifics, obviously varies from business to business. Our post, Employee or Contractor? The Complete List of Worker Classification Tests by State, outlines what the different prongs of the ABC Test mean.

Compared to labor tests used by other states, since the ABC Test assumes that a worker is an employee by default, it much harder to “pass” a worker as a contractor under the ABC Test. The California government hopes will un-gig the gig economy.

No Changes For Union Productions

Unionized productions already pay 95% of their workers as employees, and not as contractors. For this reason the unions said that they don’t see the legislation effecting their members.

In a joint statement by SAG-AFTRA, WGA West, IATSE, Hollywood Teamsters 399, and Studio Utility Employees Local 724, the unions made it clear that they do not think AB 5 will affect the industry:

“Over the past four months, we have carefully monitored this legislation as it was drafted and moved through the California Legislature…During that time, we conducted due diligence within our own guilds and unions, with outside tax attorneys, CPAs, and entertainment lawyers knowledgeable about our business and loan-out companies, and with legislative staff in Sacramento. These conversations were all undertaken to ensure that AB 5 would not undermine the rights secured by our collective bargaining agreements, including the right to form and utilize loan-out companies.”

The unions went on to state that many of their members are often paid through a loan out companies.

While the status of loan out companies has been top of mind for entertainment professionals with AB 5, the large consensus from guilds is that the bill will not effect the use of loan outs as a payment vehicle.

AB 5’s broadness should sound an alarm for non-union projects.

Under the new California ABC Test, the majority of the cast & crew of a production will be viewed as employees as they will be under the company’s control.

Having a call time could be constitute “control.” Working as an actor could be construed as usual to the business of a production company. Collaborating with the same people often could demonstrate that you are dependent on that one job, and therefore, an employee.

In a scenario where freelancers are reclassified, production companies should consider using a film payroll company that can onboard workers as short term employees and serve as their employer of record.

In any case, AB 5’s broadness should signal to many employers that they should consider updating the classification of their workers to employees.

The ABC Test clearly states that workers are employees unless the employer can prove there is an absence of control, the worker’s trade is outside the employer’s business, and the worker is engaged in the same trade with many other entities.

Failure to meet any of these prongs means you’re hiring an employee.

Of course, with any legislation, the effects can never been seen in full until a bill is applied. Once AB 5 officially becomes law in January 2020, court cases will define what exactly the exemptions are.

Be sure to check back here on Wrapbook, where we’ll be posting updates as they become available. In the meantime, knowing how to define who an independent contractor is in California, will save you a ton of potential headaches.