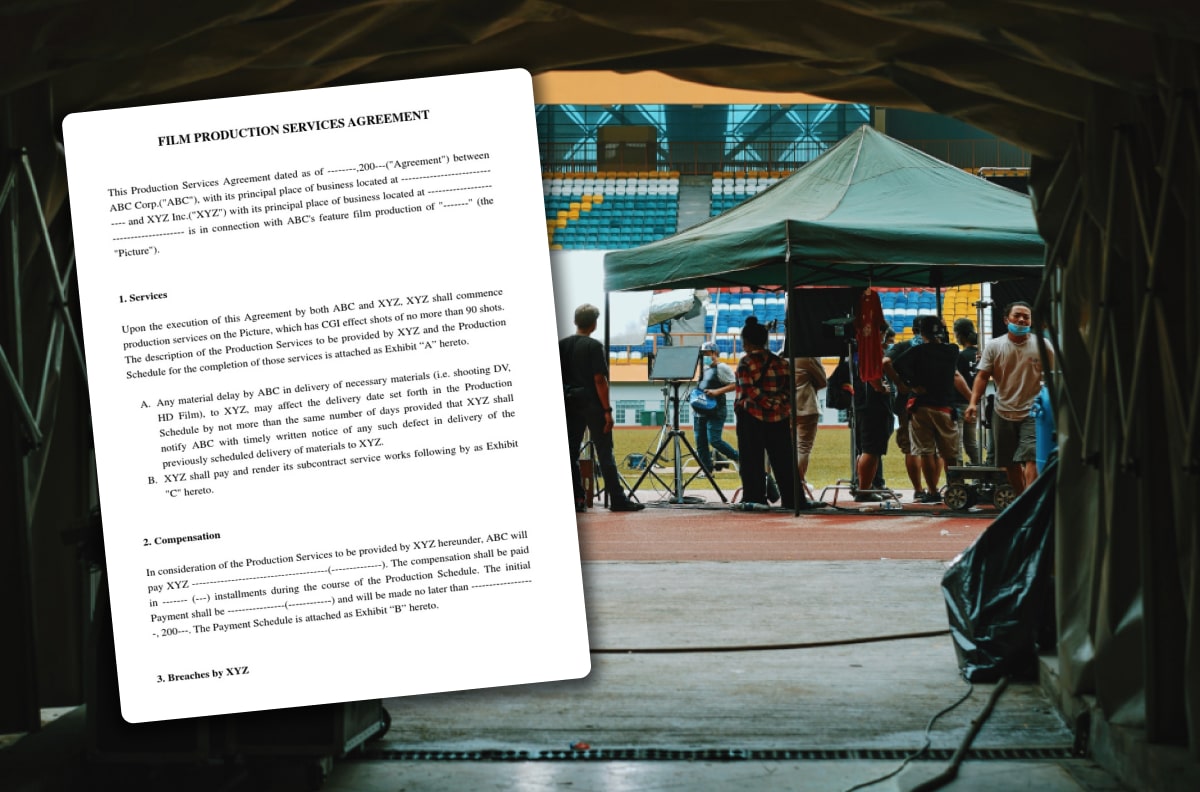 Are you looking to get the full terms of a production in writing? For most projects, this comes in the form of a production services agreement. Despite their prevalence in the entertainment industry, these often go misunderstood. Or at the very least a dreaded, but necessary legal hurdle producers must leap.

In this article, we’ll break down the most common terms you should ask your entertainment lawyer about before you start production.

If you're a producer or owner of a production company, you'll likely work with agreements often and may even need many resources before you start filming. But in the meantime, download our free production services agreement to jumpstart the process.

Now let's get into it.

What is a production services agreement?

A production services agreement is a contract between an investor, distributor, or lead-producer who wants to hire a production company to execute on different aspects of producing a film, television program, commercial, or other media production.

Depending on the film production services agreement, this can include a combination of developing the project and in some cases overseeing pre-production, filming, and post. With a financier or distributor’s requirements in mind, then the production company brings expertise, knowledge, personnel, and other resources to the table to deliver the project.

In addition to model release forms, production agreements are crucial legal documents producers and their lawyers should create before beginning work. These film agreement forms can be created, uploaded, and stored right in Wrapbook.

If you need to disseminate your production agreement to others on your team, whether for last looks or when the final document is complete, just send it with one click. Watch our pre-recorded demo to learn how. As you move through your career, you'll likely need to craft more than one production agreement with your lawyer. Store a TV or film contract template in the software (Wrapbook or any other of your choice) to ensure you have it ready for next time.

When should you use a production services agreement?

If any of these scenarios apply, you need an agreement in place before any principal photography begins:

What does a production services agreement include?

Any deal will specify the people and projects involved in the agreement; other specific terms of film production service agreements vary but may include…

The agreement will indicate the script or other material to be produced, and likely includes a thorough statement of work listing all of the specific services to be provided, often designating the specific person(s) who will complete them. A film production services agreement states when, where, and in what form the deliverables shall be completed, along with any must follow technical, commercial, and other standards.

The schedule will define the timeline for deadlines of various aspects of the project. More often than not in a film production services agreement, the delivery schedule is an exhibit. In other words, the contract attaches the schedule on a fresh page covering milestones like:

The production company and personnel will get specific credit(s) for the project as long as they perform as expected.

All sorts of problems can happen here when this isn’t addressed in the film production services agreement. For example, if a production company doesn’t get executed contracts from a cast or crew member.

In 1988, Warner Bros. sued comedian Rodney Dangerfield arguing he breached an oral contract to appear in Caddyshack II. When the dispute came to court, Los Angeles Superior Court Judge John Zebrowski exclaimed from the bench “Aren’t you people ever going to come in front of me with a signed contract?”

Whomever with your project handles payroll will be key here. If payroll isn’t managed properly or residuals go unpaid, unions may attempt to collect money from the easiest prey.

Wrapbook acts as your employer of record, manages relationships with unions to help keep you compliant, tracks expenses, timecards, and quite a bit more. Reach out to us if you ever have any questions.

While minor alterations are often fine, most changes or variations from the screenplay will require the investor’s approval.

The Financier may also want in writing the right to take over the production. The film production services agreement might include takeover rights due to specific issues like:

The financier often has the right to designate and/or approve certain aspects of the production including director, screenplay writer, cast members, and changes to the script.

WORK MADE FOR HIRE

In many film production services agreements, all personnel and vendors agree that their work-product belongs to the production company, which can then assign those contracts to the financier.

Similarly, the contract will provide that the work-product of the production company is made for hire work, and that all copyrights belong to the financier.

The agreement will clearly say the financier has the right to control the distribution and after approval, the production company will have no further rights to the source material.

As you go down the puzzling path, while you’ll find film production service agreements is the most common name for the contract, specific contract terms will vary.

While this article might be a starting off point for your research, talk to your entertainment lawyer to draw up the full agreement for your specific production needs.

If you or your team is looking for simpler solutions to onboarding, paying and managing a film crew, schedule a live Wrapbook demo today.