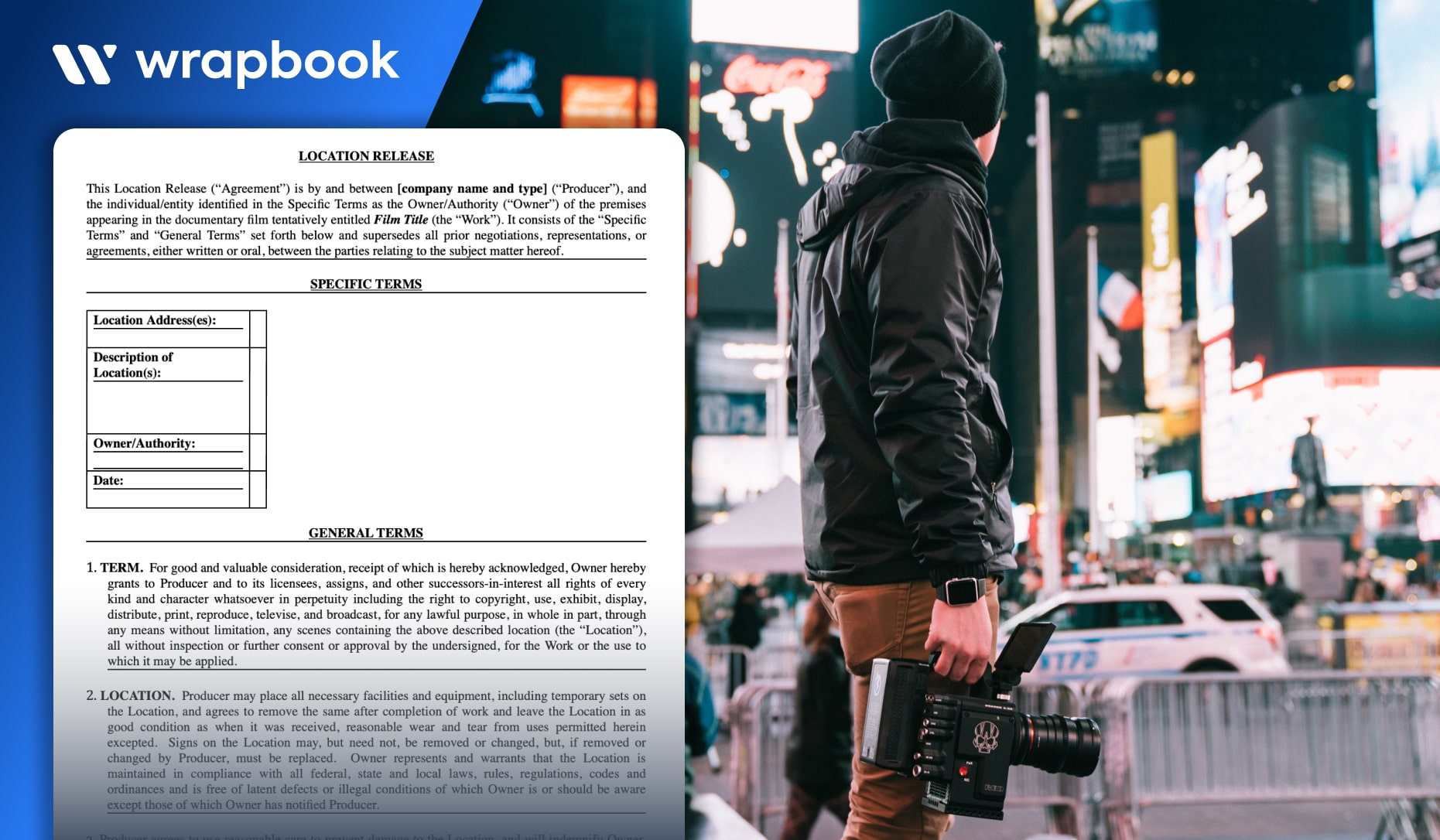 I mean can you imagine if The Avengers took place in your parent’s backyard?

Location doesn’t just help set the tone for filming days. It can make a huge difference in executing your team’s vision, and is often a character in and of itself.

So ensure you're ready with a location release form in your hands days before your production begins.

In this guide, we share a location agreement form template you can use. Plus, how to fill out the form and the most frequently asked questions around them.

While your final location release form may look different depending on your project needs, you can use this agreement sample as a springboard. Following along the specific sections of this sample agreement can also help you understand what information you may need to fill out and what general terms can potentially be involved.

What is a location release form?

In larger budget projects, obtaining the permission to film on location form falls under the responsibilities of a location scout. Otherwise, your core team will likely have to get these forms filled out. Now that we’re clear on what is a location release form, let’s look at a few other frequently asked questions.

When do you need a location release?

You’ll have to get back a signed standard location release form anytime you’re looking to shoot on private property. Any sort of photo or film project shooting in private space applies here. If you need help researching where to film for residential locations, SetScouter can help.

Looking at filming on public property? A good place to start depending on the city is Wrapbook's film permit guides:

And if you’re filming in NYC and LA, and need a little more info, Wrapbook has put together comprehensive permit eBooks to guide you step-by-step.

Why do you need a location release form?

Verbal agreements can lead to people forgetting key details. Then disputes can come up from there.

A filming location permission form confirms, in writing, the terms in which both you and the property owner agree on. That way, if a disagreement comes up with the location’s owner later on, everything is in writing.

What makes up a location release form?

Filling out the location release

Now let’s look at how to fill out the location agreement, section by section.

Generally speaking, this form is often made up of general and specific terms. Each release is different and the order may change, so always consult a lawyer before disseminating this form.

Your team can save the owner time completing this form by including the address(es) associated with the property. The location description is where you can state the specific areas of a location you plan to film within a larger space.

This field is where the location’s owner or someone who has the legal authority to act on their behalf provides their name.

Provides the dates you plan to be there on location. You can also include a provision in case you need to return to the shooting location and film due to scheduling issues.

In this sample agreement, the terms of showing the location within your project are highlighted. Whether it's for print, exhibition, and distribution, you as the producer will likely want to retain the rights in perpetuity to show scenes containing the location you're signing a release form for.

Make sure the final version of the filming location permission form (before you send it to the owner) clearly says you own the footage you gather on location and outlines what you can do with the footage and any information associated with the location. You'll also want to clearly state in the location release agreement your team is not obligated to use the footage shot at their location.

A release statement explicitly says in writing that producers are not on the hook for any losses, damages, or any other claims that occur from the production, distribution, or airing of the location from your work.

The remedy term outlines what a location owner can do if the agreement is breached by you as the producer. In this sample, it notes the owner won’t be able to end the agreement or prevent the project from seeing the light of day. The term here also states producers reserve the right not to feature the location in their final release and the right to re-enter a location for additional work necessary to complete a project (if needed).

This term explicitly states a producer can re-assign rights to film at that location during that time period to any other party. However, they may be secondarily liable for any breach in the agreement.

In location release forms, this section can cover a variety of things depending on the specific project. See our sample to get a sense of what the miscellaneous section can include.

You and the property owner will need to sign and date the location release agreement to fully execute it.

Before sending to the location owner, complete as much information as possible on the filming location permission form. Be sure location owners get a copy after the agreements are fully executed.

Also be sure to include some are where compensation is written down. Here you explicitly state if financial compensation will be provided, including how much your teams will pay and when the property owner can expect payment. This is often its own section but can also be put at the top of the release under specific terms.

Consult with an entertainment lawyer to make sure your form covers your project’s full requirements.

Get to know the ins and outs of ad placement with our essential guide to media buying.

They say loose lips sink ships. Learn how to protect yourself with a producer's guide to non-disclosure agreements.

SAG writes influencer agreement for branded content for influencers to receive health and pension benefits when applicable. Find out how it applies to you as an influencer or employer.